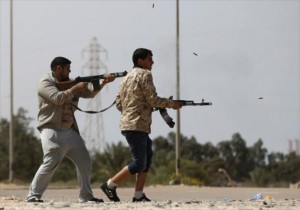 Up to 30 people have been killed in the Libyan city of Sirte as Islamic State fighters are shelling residential areas indiscriminately in reaction to an uprising, reports from Libya say.

On Wednesday, numerous clashes took place in the former Gaddafi stronghold of Sirte between locals and fighters from the Islamic State which has controlled the town for the past three months.

According to reports, 30 people were killed in the clashes and bombings as IS fighters retaliated but information is hard to verify from the city, which is under control of Islamic State fighters.

Earlier, reports emerging from Sirte said that local insurgents had taken control of the city’s port and neighbourhood No. 3 while clashes in the the south-east of Sirte saw various tribes join forces agianst IS.

The oil-rich North African country is in chaos as two rival governments and parliaments vie for power, while Islamic State and other armed groups exploit a security vacuum four years after the ousting of Muammar Gaddafi.

The UN brought the main warring factions together in Geneva this week with the aim of ending the crisis within weeks, but the diplomacy was sidelined by new fighting.

The militant group launched an offensive this week to retake the city after a rival Islamist group had expelled it.