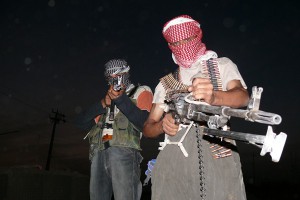 In spite of the mounting resistance from the Iraqi Armed forces and a series of over 2,500 US-led coalition airstrikes against Islamic State (IS) since August 2014, one year on from their inception, the group does not appear to be losing momentum. To date, IS controls over one third of Syria, and they threaten to usurp its largest city, Aleppo.

As for their activity in Iraq, IS’ victory in the Battle of Ramadi has increased the legitimacy of their claim as the next Islamic Caliphate in the eyes of their supporters. Thus far, IS has managed to attract over 20,000 foreign fighters from over 90 different countries, including 17-year-old West Yorkshireman and suicide bomber Talha Asmal – the latest victim in a long line of radicalised Muslim youths to give his life for the creation of the Islamic State.

Nonetheless, IS’ presence in Iraq and the Levant should not overshadow the implications of their expansion into South Asia.

As Quilliam illustrate in our latest report, in addition to Iraq and the Levant, it has been made quite clear that Afghanistan, Pakistan, and parts of Western India are also targets of IS’ proclaimed Caliphate. In January 2015, a group of former Pakistani Taliban Commanders pledged allegiance to Islamic State and they established IS’ leadership council in Khorasan Province (ISKP): an historic region that encompasses much of Iran, Afghanistan, and parts of Pakistan. Since then, ISKP has claimed responsibility for a series of terrorist attacks within the region, including the bombing of a bank in Jalalabad, Afghanistan, that killed 35 civilians in April of this year.

However, in order to fully understand the magnitude of the threat that IS poses to the stability of this region, it is important to look beyond the actions that are carried out by IS themselves, and to appreciate the consequences of their role as an ideological destabiliser in South Asia.

IS’ takfiri ideology has not only appealed to disaffected members of traditionally sectarian groups such as Al Qaeda and the Pakistani Taliban, but it has also inspired civilians to pledge allegiance to the group, despite their Deobandi origins. Evidence of the support that IS has received from the aforementioned sectarian groups is made clear in a letter that was written by a leader from the Afghan Taliban, Alhaj Mullah Akhtar Mohammad Mansoor, to IS’ spiritual leader, Abu Bakr al-Baghdadi.

Interestingly, this wave of support has been motivated by their highly successful social media campaigns, the $400 per month salary that IS offers its fighters, and the establishment of terrorist training camps and recruitment centres for the war in Syria. Quilliam has identified three noteworthy implications for the stability of South Asia that are likely to materialise if IS continue to assert themselves within this region.

The first, and perhaps most obvious implication of IS’ ideological success within the region, is that they will be able to establish a platform of loyal Jihadis and proxy forces to form the basis of a more sophisticated fighting force. This force can then be mobilised when IS shift their focus away from Iraq and the Levant, and toward the annexation of Khorasan and the wider South Asian landscape into their Islamic Caliphate.

The second major implication is derived from the response of other incumbent militant organisations to IS’ encroachment into the region. It is important to remember that Jihadist organisations are not monolithic, and that there are subtle theological, political, and strategic differences between each one of the 69 militant Islamist groups that operate within South Asia. As such, IS’ growing presence has elicited a strong backlash from many of these organisations, and in May of this year, 15 IS fighters and 12 Taliban militants may have been killed over declarations of allegiance to al-Baghdadi.

Although this infighting could be framed as beneficial to the citizens of the affected regions because it turns the extremists attention onto one another, and away from the public; infrastructural damage, extortion, humanitarian costs, and a plethora of associated incidences of collateral damage undermine this point.

The third and final implication of IS as an ideological destabiliser is related to the way that IS has motivated existing militant groups to enhance their presence through either expansion, or the decision to engage in, increasingly violent attacks. In 2014, Al Qaeda’s leader, Ayman al Zawahiri, established a new branch of the organisation in response to IS’ growing influence. This branch is called Al Qaeda in the Indian Subcontinent (AQIS), and in May 2015, they claimed responsibility for the vicious murders of secular bloggers in both Pakistan and Bangladesh.

In conclusion, although the group has not yet established a coordinated fighting force within the region, as IS continue to pursue their strategy of ‘expansion and consolidation’ within South Asia it is important that the implications of their role as an ideological destabiliser do not go overlooked.