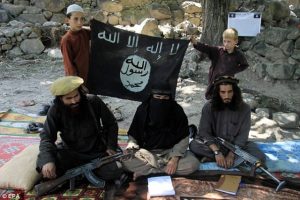 Afghanistan’s branch of the Islamic State terrorist group has expanded its extremist activities to the country’s seven provinces, as opposed to only one province last year, a United Nations report revealed according to voanews.com.

While fighting over territorial control between Afghan forces and Taliban insurgents escalated in 2017, rise in attacks by Islamic State of Khorasan Province, or ISK-P fueled insecurity in the country, said a report by U.N. Office for the Humanitarian Affairs.

“Growing insecurity in Afghanistan is not only characterized by increased attacks on district centers, but also by a doubling of attacks attributable to … Islamic State of Khorasan to more than 230 in the first half of the year,” the agency noted.

It said until the first half of 2016, ISK was operating in the eastern Nagarhar provinces. U.S. and Afghan military officials, however, repeatedly have claimed that IS remains confined to few southern districts of Nangarhar and parts of the neighboring Kunar province.

They maintain that relentless counterterrorism ground and air operations have killed hundreds of fighters linked to the organization and reduced its territorial control in recent months.

OCHA also reported an escalation of fighting in Afghanistan that displaced more than 50,000 civilians in August, the largest monthly displacement in 2017.

The Taliban-led insurgents attacked or fought over control of at least eight district centers in seven Afghan provinces during the month, it said.

“The third week of August has been one of the most active in terms of armed clashes, according to security sources, and the whole month continued a trend of starkly intensified conflict across the country,” it added.

From January to end of July, anti-state armed groups had already attacked and taken control of more than a dozen district centers around Afghanistan, noted the U.N. humanitarian agency.

Afghan security forces have since retaken control of only two districts, Qala-e-Zal and Sangin in northern Kunduz and southern Helmand provinces respectively, often after heavy fighting that included the military deploying reinforcements and pounding enemy positions with airstrikes.

The intensification in Afghan fighting is evident from dropping of more 555 bombs by the U.S. military in August, the most in a single month. Most of them focused on Helmand and Nangarhar, a U.S. military spokesman told VOA last week.

But hostilities are expected to escalate in the aftermath of President Donald Trump’s “new strategy” unveiled last month to break the stalemate with the Taliban in what has become the longest foreign military engagement in the U.S. history.

“The recent decision by Donald Trump to surge additional troops to Afghanistan may also result in a more volatile landscape over the coming months,” cautioned OCHA.

The humanitarian agency said insecurity is likely to increase and further expand over the remainder of the year, adding no seasonal lull in fighting is anticipated as winter arrives later and is expected to be more mild.

The U.N. agency criticized Trump for not addressing the issue of civilian casualties caused by NATO airstrikes.

It noted the U.S. president “announced less political oversight over commanding airstrikes and increasing the leeway of military leaders, which increases the likelihood of airstrikes” on anti-government groups that affect civilians.

OCHA cited two airstrikes carried out by international forces on 28 and 30 August that, according to a U.N. probe, killed at least 28 civilians and injured 16, all women and children.