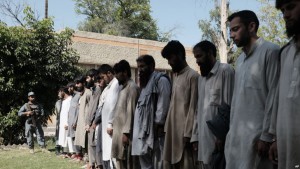 Officials in Afghanistan’s eastern Nangarar province say so-called Islamic State is trying to imprint a lasting legacy on children in the region through an increasing network of schools.

Authorities say IS runs at least 25 seminaries in four districts of the province where children are taught military ideology and how to prepare for suicide attacks.

“Madrassas (religious seminaries) that were built by local people are now being used by IS for militant activities,” Abdul Zahir Haqqani, director of religious affairs in Nangarhar, told VOA’s Afghan service. “They use them as military centers where they teach militancy, conduct military trainings, and plan their activities,” he said.

Children of IS fighters make up the majority of pupils, but some local children also attend the IS-run schools, officials say.

Residents say they are alarmed by IS’s expertise in teaching terror to children and are asking for local and government intervention.

“The madrassas in the areas remain under IS’s control where it trains its fighters,” Ezzatullah, a local resident in the Dehbala district told VOA.

“They used to be under the government but not anymore,” said Ezzatullah, who like many Afghans uses a single name. “They teach how to shoot a Kalashnikov, a PK machine gun, and RPG (rocket-propelled grenade.)”

Provincial leaders say they are preparing an assault against IS to rid them from the schools.

“IS and other militant groups always try to use Islamic centers as their bases where they not only provide training, but also use them for other terror activities,” provincial government spokesperson Attaullah Khogyani told VOA’s Afghan service.

“We will continue our efforts to clear the Islamic centers of IS presence without causing damage to the centers,” he said.

IS launched its operation in the Afghanistan/Pakistan region in early 2015 after establishing bases in remote eastern border areas of Afghanistan. The group calls Afghanistan, Pakistan and parts of Iran its so-called Islamic State of Khorasan Province, and allegedly takes orders from leaders in Syria.

In Nangarhar, the fight against IS has at times involved a varied combination of local militias, provincial police, Afghan forces, Taliban fighters and U.S. drone strikes.

IS is also using mosques as military centers. According to Haqqani, the group has turned at least 60 mosques in various districts of Nangarhar into military training centers. Dozens of mosque imams whom IS deemed as repugnant to its extremist ideology have been killed by IS militants.

Experts say the indoctrination of children by IS will likely have a chilling reverberation for years to come, especially in a country long-hit by extremism and militancy.

“The only thing worse than a society falling prey to the extremist ideologies of terror is when society’s children succumbs to the same thing,” said Michael Kugelman, a South Asia specialist at the Woodrow Wilson Center, a Washington think tank. “And that’s precisely what we have to worry about here amid this news.”