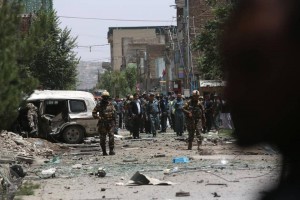 In political debates, two top White House contenders – Hillary Clinton and Jeb Bush – have proposed different ways to handle the rise of the Islamic State of Iraq and Syria (ISIS). But one point is continually missed by all – ISIS is no longer an Iraqi or Syrian entity.

Americans continue to refer to the terrorist group as ISIS, but it really has become simply the Islamic State (IS) and it has expanded to the rest of the world. The brutal organization, led by Abu Bakr al-Baghdadi – the self-proclaimed caliph – has made major inroads into Afghanistan and the tribal areas of Pakistan, overtaking its weaker contenders, the Taliban and al-Qaida.

With the reported death of Taliban leader Mullah Muhammad Omar, the IS has become particularly powerful in Afghanistan, a country that is still far away from having a strong democratic government.

Different journalists and sources in the restive Afghanistan told this reporter that with Mullah Omar’s death, the Taliban’s unity has disappeared, resulting in an exodus of militants from the “weaker” Taliban to the “stronger” IS. “The fact that a new Taliban leader had to stress unity in his first audio message indicates a growing divide,” noted Afghan journalist Babakarkhail, who was reached by phone from Kandahar, the stronghold of the Afghan Taliban.

According to reports in the Ghazni and Zabul provinces, the Taliban’s white flags have been replaced by the black flags of IS. A Pakistani reporter, Faizullah Khan, who spent around six months in an Afghan prison last year for an illegal trip to the country claims Pakistani and Afghan Taliban commanders who had recently pledged allegiance to IS leader al-Baghdadi knew Omar was dead.

The head of the Uzbekistan Islamic Movement, Usman Ghazi, who had also demanded Mullah Omar show himself if he were still alive, changed sides just after the death was announced. It is most likely that some Afghan Taliban will change sides and there is an even greater possibility that a large number of Pakistani Taliban will refuse to follow Mullah Akhtar Mansoor, the successor of Mullah Omar, because they believe he is close to Pakistani intelligence agencies, Khan believes.

IS chief Hafiz Saeed Khan – whom the Afghan government claimed was killed along with Shahidullah Shahid in a drone strike last month – has urged upon Taliban fighters to shift their loyalty to IS at a time when there is severe infighting between Taliban and IS militants.

On the Pakistani side of the border, the IS has reportedly gained support and it is likely that the majority of al-Qaida and Taliban militants will change sides.

According to Aqeel Yousafzai, a Peshawar-based security analyst who has written several books on the Taliban, more than 300 hard-core Taliban commanders, militants and suicide bombers from federally administered tribal areas and the Khyber Pakhtunkhwa province of Pakistan have joined IS because of the Taliban’s regrouping and because of the international charm and attraction of the IS. “We have credible information that many militants belonging to Tehreek-e-Taliban Pakistan are considering having allegiance to ISIS,” Yousafzai said in an interview.

Where the U.S. candidates stand

An Aug. 17 story by Margaret Hartmann in New York magazine lays out how the 2016 U.S. presidential candidates would defeat IS.

Some have suggested sending more troops to Iraq to destroy the outfit there. Jeb Bush believes IS has gathered strength due to the U.S. troops’ departure from Iraq. Sen. Lindsey Graham advocates destroying IS through more troop deployment in the region.

Sending ground troops, contrary to President Barack Obama’s strategy of targeting terrorists from the air, is not the only solution being offered by candidates. “Defeating the terrorist group will require cutting off their funding sources and also sending more U.S. forces,” Donald Trump said on CNBC’s “Morning Joe.”

“I would knock out the source of their wealth, the primary sources of their wealth, which is oil. And in order to do that, you would have to put boots on the ground. I would knock the hell out of them, but I’d put a ring around it and I’d take the oil for our country,” the magazine quoted Trump as saying.

Bush agrees with those calling for more troops. Clinton suggests that the United States will have to help the Iraqis get better organized in order to take on the IS threat themselves.

When candidates mention IS, they do so in an Iraqi context, whereas the lethal group has gone miles beyond the Iraqi and Syrian borders. Those who cover military operations in Afghanistan and Pakistan say the group has become so powerful in the region that the proposition of rooting them out only from Iraq seems absurd.

The proposals by various candidates also seem to be a result of misdiagnosis of the issue. For instance, on the Pakistani side of the Durand Line, the security forces either eliminated the leadership of Tehreek-e-Taliban Pakistan (TTP) or made them run to the other side of border. But once the militants on the ground found alternatives, they joined the IS.

“The problem with leadership is that they are after the faces. The people carrying certain ideology wear new faces after the old one is disfigured through military operations,” says Yousafzai, adding that their problem will remain unless the ideology breeding terrorists is eliminated.

“The challenge in dealing with terrorist groups is their asymmetrical approach to war. Their silent process of indoctrination of high skilled professionals poses a grave threat to states. On top of that, most states have failed to come up with a counter narrative to deal with such groups,” said Hasan Abdullah, a security analyst who has researched Pakistani militant groups.

The story of three women from the United Kingdom joining the IS endorses what Yousafzai and Abdullah believe. An estimated 4,000 Westerners have traveled to Syria and Iraq, more than 550 of them women and girls, to join the IS. All of them are described as highly educated students who fall prey to the militants’ ideology through social media.

The presidential candidates seem to be ignorant of these facts, as none of them has pressed for alternative ways to deal with the issue, whether in Iraq or elsewhere. All they propose is use of force, which has already proved counterproductive.

Fighting wars may be a way to attain certain goals against terrorists. But with more than a decade of war, terrorism has continued to grow, indicating the war plan is not working. Presidential candidates need to come up with solid, logical tactics to prove themselves right and the militants wrong.

Correcting some of the policy errors of the past may be another strategy. Criticizing the United States’ misadventure in Iraq may be a good thing, but stopping further misadventures may be the better option.