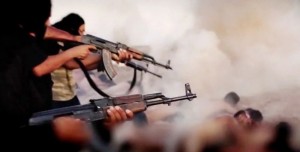 The Islamic State (IS) terrorist group has executed four of its senior commanders in Iraq’s northern province of Salahuddin on the ground that they had fled during clashes with Iraqi government forces.

A security source, speaking on condition of anonymity, said the terrorist group’s leader, Ibrahim al-Samarrai alias Abu Bakr al-Baghdadi, ordered the execution of the IS top-brass by a firing squad on the outskirts of the city of Shirqat, located some 300 km north of Iraq’s capital Baghdad, Iraqi News online reported.

On February 11, the IS executed nearly two dozen fellow militants in the city of Tal Afar, 420 km northwest of Baghdad. The executed terrorists had reportedly escaped clashes with Iraqi Kurdish Peshmerga forces.

This came a day after the IS executed 13 of its own members after they suffered defeat during an offensive in Iraq’s northern oil-rich province of Kirkuk.

The IS started its campaign of terror in Iraq in early June 2014. The heavily armed militants took control of Mosul before sweeping through parts of the country’s Sunni Arab heartland.

The terrorists have been carrying out horrific acts of violence, including public decapitations, against all Iraqi communities such as Shias, Sunnis, Kurds and Christians.

Iraqi soldiers, police units, Kurdish forces, Shia volunteers and Sunni tribesmen have recently succeeded in driving the IS terrorists out of some areas in Iraq.