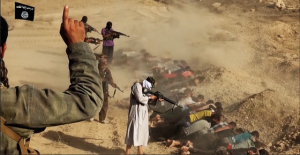 The Islamic State (IS) militants executed at least 26 people near the city of Palmyra of Homs Governorate in Syria, a monitor group said on Thursday.

The IS militants killed 26 people, including beheading 10 of them, in the villages of Amiriyeh and Sukhneh near Palmyra, the Syrian Observatory for Human Rights said, adding that some of the people were killed on charges of working for the government forces.

The UK-based watchdog group said intense battles between the Syrian government forces and the IS have been raging at the outskirts of Palmyra in the eastern countryside of the central province of Homs, leaving 15 IS militants killed.

The IS militants had managed to enter some buildings at the eastern outskirts of Palmyra, before the Syrian army dislodged them and recaptured the buildings, it added.

Meanwhile, the official Syrian TV cited a military source as stating that the Syrian air forces have launched focused strikes against the IS militants, who attempted to infiltrate the southern parts of Sukhneh, killing many of them.