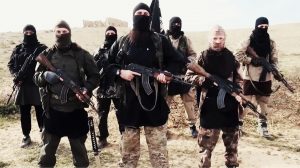 A report from the United States Department of Defense warns that the Islamic State is swiftly returning to its insurgent roots, as observers in Iraq and Syria caution that the group is witnessing a revival, like reported by intelnews.org.

It has been four years since the Islamic State —known then as the Islamic State of Iraq and Syria, or ISIS— conquered much of eastern Syria and more than a third of Iraq’s territory. But by the end of 2017, virtually the entirety of ISIS’ self-styled ‘caliphate’ had been obliterated by an ‘unholy alliance’ of US-backed Iraqi government forces, Iranian-supported Shiite militias, Kurdish guerillas and Western airpower.

However, experts warn that, despite its loss of territorial control, the Islamic State maintains an active force of as many as 30,000 armed fighters in Iraq and Syria. Additionally, a recent US government report argues that, having been driven out of nearly all of the territory that it once held, the Islamic State is promptly “returning to its insurgent roots”. The report, authored by analysts at the US Department of Defense, claims that the militant Sunni group is “re-emerging as a guerrilla force”. In the place of what used to be a de-facto state, an “effective clandestine ISIS organization appears to be taking hold”, it states. The Pentagon document, summarized in aFinancial Times article on Thursday, appears to be backed by information from the ground in Iraq and Syria. Iraqi military sources told The Times that ISIS appears to have more fighters in its ranks than initially thought, and that the group’s organizational structure that helped it grow in the first place “has not been eliminated”.

Moreover, the group is “still well-funded” and its operations remain lethal, said the paper, especially in Iraq, where it continues to undermine the government’s efforts to improve the country’s security. Islamic State fighters are systematically targeting regional leaders, said The Times, in an effort to prevent the government from delivering economic development in Iraq’s Sunni-majority western regions. A similar pattern of activities is being observed in Syria, where a resurgence of ISIS activity has prolonged the deployment of around 2,000 US military personnel there. What is more, ISIS fighters frequently cross the Iraq-Syria border and spend much of their time in safe houses and other hideouts. The paper quotes Yahya Rasool, spokesperson for the Iraqi Army’s Joint Operations Command, who says that “our war on ISIS today is an intelligence war, not a military war. We are searching and raiding their hide-outs”.