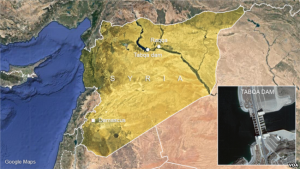 The Islamic State group has ordered an evacuation from its de facto capital, Raqqa, following warnings that the Tabqa Dam upstream on the Euphrates River could collapse, like reported by ap.org.

The activist-run Raqqa is Being Slaughtered Silently says civilians are fleeing Raqqa en masse. It says the militants are warning residents that the dam is out of service, weakened by U.S.-led coalition airstrikes, and could collapse. It says water levels are rising behind the dam.

The Britain-based Syrian Observatory for Human Rights, an opposition-run monitoring group, is also reporting the dam is out of service.

The two groups rely on local contacts to smuggle information out of IS-held territory.

U.S.-backed Syrian Kurdish forces are battling IS near the militant-held dam as part of a broader campaign to take Raqqa.