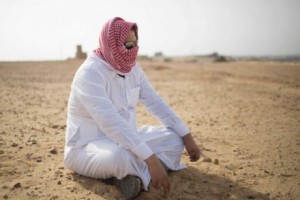 Though he was taking a big risk, Abu Faisal (not his real name) agreed to meet ABC News in a secret location.

He is a marked man, after helping the Egyptian army with key information against Islamic State (IS) in Egypt.

“My family doesn’t know what I am doing with the Army. This is a patriotic duty,” 30-year-old Mr Faisal said.

“I give information. I have eyes everywhere. I watch everything like gatherings, suspicious cars, where people have parked. I lead a group of Bedouins doing this.”

He wants to highlight Egypt’s deadly war against IS — and the risk of more terror — if the Government undervalues the critical role Bedouins are playing.

The recent bombing of a Coptic Church in Cairo, killing 28 — mostly women and children — redrew global attention to IS’s presence in Egypt.

The jihadist group has attacked Cairo before, but this was by far the largest and deadliest incident.

It has raised fears the group may be stepping up attacks in Egypt’s main cities.

The most dangerous and active insurgent group in the country has, since 2011, been mainly confined to the Sinai Peninsula — the large desert region stretching between the Suez Canal and Israel.

After pledging allegiance to IS two years ago, it became known as Wilayat Sinai (“Sinai Province”). Since then, it has grown bolder.

Last year’s Russian Metrojet explosion over the Sinai killed all 224 people on board, and dealt a body blow to Egypt’s vital tourist industry.

“They are capable of committing acts of terror that no other group in the history of Egypt has even come close to,” journalist and author Mohannad Sabry said.

Although the military has been successful in largely restricting the jihadists to the northern part of Sinai, the militants have waged a relentless war, and the army has deployed troops, tanks and fighter jets to combat them.

Hundreds of policemen and soldiers have been killed.

The tribal Bedouins, like Mr Faisal, with traditional homelands in Sinai, are crucial in the fight.

Some act as guides while others, like him, provide information.

“Without people like me helping the army, they can’t even move a military vehicle,” he said.

“I can give information to the extent that we see cars parked suspiciously and the army can come hit it from the air in a helicopter very quickly.”

Mr Faisal stressed they assist the army out of love of country and tradition, as “historically Sinai has always played a big role in wars against Israel and the army has always co-operated with Sinai’s sons”.

But their loyalty is wearing thin.

Mr Faisal said some Bedouins are torn between fulfilling what they regard as their “patriotic duty” to help the army, and the lack of rewards and acknowledgment they get for such dangerous work.

“The army doesn’t give us any credit for what we do. And when the guides are killed, it takes days to get the death certificate, and they always put the cause of death as random bullets.”

Sinai’s Bedouins have long complained of discrimination by the central Government.

Disenfranchisement, particularly in the young, has driven radicalisation and recruitment into Wilayat Sinai.

Bedouin lives and livelihoods are threatened by the terrorists, and those who want to help the fight think discrimination is short-sighted.

They are banned from joining the same army and security services they are now assisting.

“The army does it for the same patriotic reason but they are getting paid,” he said.

“This is causing resentment and some have stopped helping.”

The suicide bomber behind the Coptic Church attack is believed to have been radicalised in prison by a cell with links to Wilayat Sinai fighters, undetected by authorities.

The Bedouins pay a high price for the help they give.

Abu Ahmed (not his real name), 27, was abducted in July 2014 by Wilayat Sinai fighters from a town near the border with Gaza.

Sitting at a cafe with friends, suddenly a car pulled up and three masked men with Kalashnikovs got out.

“They picked me out from everyone, covered my face with a black hood and handcuffed me. They put me in the boot,” he said.

He was driven into the desert.

“They made me kneel and I was still handcuffed,” he said, demonstrating the position, like IS hostages in orange jumpsuits.

They left him kneeling alone in the sand, before interrogating him about helping the army.

Mr Ahmed soon realised he had been mistaken for someone else.

“The next day they let me go, but warned me that if I ever helped the army they would chop my head off and put it on show for people to see,” he said.

Terrified, he fled permanently to Ismailia with his wife and three children.

“They told me to send a message to people that anyone helping the army will be killed and the knife is ready for them,” he said.

In September, Ahmed AbdelHamid Saqr, 17, was setting up a street stall in Sheikh Zuweid township with his seven-year-old sister.

“The militants shot him in front of everyone. To this day we don’t know where his body is.”

“The top targets remain the informants and we’ve seen dozens of them beheaded on videos spread by ISIS for propaganda and to deter anyone else from even thinking of collaborating with the authorities,” he said.

Mr Faisal said the Bedouin are fighters willing to take the risk, and questioned why the Government was failing to value what could be their greatest asset against IS.

“For me it’s a principle,” he said, quoting an Egyptian saying: “The hell of the army is better than the paradise of ISIS.”