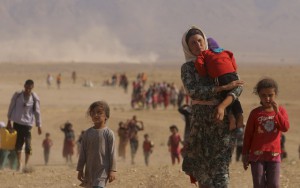 Yara al-Haj, an inpatient at a clinic in Turkey, is waiting anxiously for the results of an MRI scan she underwent a few days ago.

The 16-year-old began having health problems in June 2014.

“I suddenly started losing my balance, and I’d get these shaking fits that jerked my whole body around as if I were dancing,” she said. “I began feeling like I was unable to speak, muttering things I couldn’t understand myself. Back then, it I seemed to be heading towards madness.”

It was a long time before Yara found out that these were the first symptoms of epilepsy. The fits she had been experiencing were partial epileptic seizures which then became grand mal seizures.

Raed al-Haj, Yara’s cousin, accompanies her when she travels from Deir al-Zor to Raqqa and on to Turkey for medical treatment.

He says Yara’s condition has deteriorated because there are no neurological specialists in areas controlled by Islamic State (IS).

“In fact, there are no neurological specialists at all now in Deir al-Zor,” he added.

Yara is one of many thousands of Syrians whose access to vital treatment has been curtailed under IS rule.

Between June 2012 and July 2014, the Free Syrian army controlled parts of Deir al-Zor. Initially, health services were run by the Deir al-Zor Medical Association, a grassroots initiative by local medics. This was later consolidated into the United Medical Office, after all the province’s different medical bodies decided to join forces.

Locals say the United Medical Office did an exceptional job providing medical care for ordinary people as well as fighters, despite its limited resources.

Abu Omran, one of the few doctors still working in the city, told Damascus Bureau that no effort was spared “in trying to alleviate the devastating effects of this war on citizens. All medical services were provided free of charge, from the moment the patient entered the clinic. Even medication and hospitalisation were free.”

The United Medical Office ran a number of clinics and pharmacies, among them the Shahid Ziad Saffuk hospital, the Shahid Yaman Hidaoui hospital in the Sheikh Yassin neighbourhood, the paediatric hospital, the Dar Aisha birthing centre and the Shahid Ahmad Fatih pharmacy, as well as a physiotherapy centre and two dental clinics.

According to the United Medical Office, more than 1,000 patients used to receive free medication each week, including people with chronic illness and children.

When IS seized control of the city in July 2014, the militants included health services in their clampdown on anything they viewed as too secular or associated with the Damascus government.

Local doctors were harassed, among them Radwan al-Salem who was arrested on charges of apostasy. His fate is still unknown, although there are rumours he has been killed. Another doctor, Saleh al-Haj Khudur, was detained earlier this year.

IS imposed many other restrictions on the work of medical organisations and personnel.

Abu Omran explained, “They warned us to cease all contact with ‘infidel’ Western organisations unless we received permission to do so from Abu Othman, at that time the Emir of Medical Affairs in the ‘Province of Good’, the new name they gave to Deir al-Zor.”

Early this year, IS announced that it would no longer engage with international organisations, even those like Medical Relief for Syria which it previously allowed to operate within its territory.

IS militants arrested a number of Medical Relief workers in late January 2015. Some of them are still in custody.

Then in early February, Abu Adam al-Masri, the current Emir of Medical Affairs, announced the closure of the provincial health department.

All this contributed to an exodus of medical staff from IS-controlled territory. Today, there are only two specialists left in the city of Deir al-Zor. One is a surgeon, the other a specialist in adult diseases.

The IS health office also shut down a number of hospitals and clinics.

Mohammad al-Khayri, a senior manager at the Shahid Yaman Hadaoui hospital, swore allegiance to IS and as a result decided to fire the whole medical team.

The IS health department then moved the staff en masse to the Shahid Ziad Saffuk Hospital, renamed the Faruq Hospital.

IS also shut down all the free dental clinics, and sacked most of the staff who ran pharmacies distributing medicine without charge. With rare exceptions, such free services are now only available to IS members, thus increasing the financial burden on ordinary citizens.

Abu Ishaq, 69, suffers from asthma as well as high blood pressure and high cholesterol. He said the closure of the free pharmacy system had forced him to spend 5,000 Syrian pounds (27 US dollars) a month on medication, a huge amount considering his limited income.

As a result, Abu Ishaq has been forced to reduce his daily dose amount of medication.

An estimated 150 people a day seek treatment in Deir al-Zor’s hospitals and clinics, and all of them now have to pay for the health services they once received free of charge.