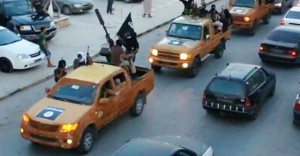 The Islamic State claims to have established “provinces” in as many as 10 nations beyond Syria and Iraq, with radicalized followers carrying out a growing number of suicide and other attacks around the world, from Paris and San Bernardino to Jakarta, Beirut, Cairo and Istanbul.

But it’s the Syria-based jihadi group’s expanding grip on one nation — Libya — that is proving most worrisome to U.S. intelligence officials, who say the number of foreign fighters traveling to join the so-called “Libyan Province” of the group also known as ISIS and ISIL has surged in recent months, providing a critical fallback fortress as Russia and the U.S.-led coalition battle the group in Syria and Iraq.

“There has been a pretty big uptick,” said one intelligence source, who said U.S. analysts are increasingly of the view that Islamic State leader Abu Bakr al-Baghdadi is bent on expanding the group’s footprint in Libya, even as his hold on Syria and Iraq is seen to be coming under increasing strain.

“Libya is the next ISIS hot spot in terms of trying to control a serious amount of territory, as well as oil fields,” said the source, who spoke on condition of anonymity because internal U.S. intelligence assessments on the Islamic State are classified.

Other U.S. officials, who also spoke anonymously, said the drive to develop the Libyan “province,” centered around the coastal city of Sirte, halfway between Tripoli and Benghazi, is not a response to increasing pressure from the U.S. and Russian military campaigns against the group in Syria and Iraq, but a strategic decision to develop what amounts to a second homeland.

“The key thing to understand here is that this is not about fighters flowing out of Syria and Iraq because they’re under pressure from the U.S. coalition or other forces,” said one of the officials. “It’s not like a toothpaste tube getting squeezed.”

While it has become tougher for foreign jihadi recruits to reach Islamic State’s main theater in Syria and Iraq because of increased border controls, “what’s actually happening is ISIL leadership is telling jihadist recruits from around the world to go join the franchise in Libya,” the official said.

Libya descended into chaos following the U.S.-backed ouster of longtime dictator Moammar Gadhafi in 2011. Rival governments, and the militias that support them, have since vied for control of both the government and the country’s vast oil reserves, which are estimated at 48 billion barrels — the largest in Africa.

Thriving in a vacuum

While not aligned with Islamic State, an Islamist-leaning militia alliance overran Tripoli in mid-2014, forcing a more secular and internationally recognized government to take refuge in the nation’s east. The U.N. has since brokered a power-sharing deal between the two, but it’s unclear whether it will hold — or whether a new unity government will emerge with enough power to contain the extremists who have thrived in the security vacuum.

In addition to Islamic State, a host of other jihadi groups have exploited the chaos in Libya, including al Qaeda in the Islamic Maghreb and Ansar al Shariah, the outfit widely credited with carrying out the Sept. 11, 2012, attacks on the U.S. consulate in Benghazi.

Since the attacks, which killed U.S. Ambassador J. Christopher Stevens and three other Americans, the Obama administration has generally avoided heavy engagement in Libya, but has authorized sporadic airstrikes and at least one clandestine U.S. special forces raid that targeted those deemed responsible for Benghazi.

The administration also says it authorized the strike in mid-November that killed Islamic State’s senior commander in the nation — an Iraqi named Wissam Najm Abd Zayd al Zubaydi, who was also known as Abu Nabil.

Al-Baghdadi, the Islamic State overall leader, is believed to have deployed Abu Nabil to Libya in September 2014 with the specific task of establishing a regional province loyal to the Syria-based “caliphate.”

A Pentagon statement in November predicted that Nabil’s death would “degrade ISIL’s ability to meet the group’s objectives in Libya, including recruiting new ISIL members, establishing bases and planning external attacks on the United States.”

But the group’s recent surge in Libya suggests the assassination had little impact, and analysts say that, overall, the Western counterterrorism response in Libya has been limited even as Islamic State’s base has grown.

“As a result, what we’re seeing is an expansion of ISIS and other jihadist groups,” said Seth Jones, who heads the International Security and Defense Policy Center at the Rand Corp. “A drone strike here or there is not really doing much, when, ideally, you want to be taking back territory.”

Islamic State first announced its presence in Libya in early 2015, when it circulated a grisly, slickly produced propaganda video showing the beheading of 21 Egyptian Coptic Christians on a Mediterranean beach in the nation.

A report last year by the Quilliam Foundation, a British counterextremism think tank, found that Islamic State leaders used the video to lure fighters away from other — less media-savvy — jihadi groups operating in Libya.

Islamic State leaders in Syria and Iraq viewed Libya as a “source of great potential due to its asset wealth, strategic location and immense amount of weaponry still present there following the overthrow” of Gadhafi, according to the foundation, citing a strategy document that had circulated among Islamic State supporters in January 2015.

The document circulated emphasized how successful exploitation of Libya would relieve pressure on the central “caliphate” and would help the group defend against the “crusader coalition” of nations trying to destroy it. Islamic State fighters would be able to reach Europe “even by rudimentary boat” from Libya’s long coastline, the document said, describing the nation as an unparalleled platform for launching attacks on European states and shipping lines.

It also framed Libya as the geographic “key” to long-term jihadi penetration deep into Africa, including into Egypt, Tunisia, Sudan, Mali, Algeria and Niger.

By last summer analysts estimated that some 5,000 Libyan jihadis had joined with the Islamic State in Libya. The figure is seen to have grown significantly since then — as has the number of attacks being carried out by the so-called Libya Province.

The most notable came earlier this month, when Islamic State operatives detonated two suicide car bombs near the Es Sider oil export terminal on the Mediterranean coast. Many read the Jan. 4 attack as evidence the Libyan outpost is bent on trying to replicate the Islamic State’s success in Syria and Iraq, where the terror group has financed itself by smuggling oil from nearby fields and refineries.

While Islamic State has yet to fully seize any major oil operations in Libya, it has reportedly taken control of the strategic coastal town of Ben Jawad, roughly 20 miles from the Es Sider terminal. The terminal is near the heart of the nation’s so-called “oil crescent” between Benghazi and Sirte.

“Oil revenue has been a key component of ISIL’s economic viability, so it wouldn’t be surprising if ISIL tried to gain control of the oil crescent to augment its revenue streams,” said one of the intelligence officials who spoke with The Times.

“If the Islamic State is able to gain access to those oil facilities and actually pump oil and sell it, that could be a potential game-changer,” said Bill Roggio, an editor of The Long War Journal published by the Foundation for Defense of Democracies.

“That would make them the most powerful jihadist group operating in Libya — they’ll have a lot more ability to pay salaries to their fighters than al Qaeda has,” he said.