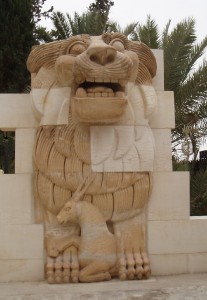 Islamic State (IS) group jihadists have destroyed a famous statue of a lion outside the museum in the Syrian city of Palmyra, the country’s antiquities director said Thursday.

Syrian historian Maamoun Abdelkarim said the statue, known as the Lion of al-Lat, was an irreplaceable piece and was apparently destroyed last week.

“IS members on Saturday destroyed the Lion of al-Lat, which is a unique piece that is three metres (10 feet) tall and weight 15 tonnes,” Mr Abdelkarim told AFP.

“It’s the most serious crime they have committed against Palmyra’s heritage,” he said.

The limestone statue was discovered in 1977 by a Polish archeological mission at the temple of Al-Lat, a pre-Islamic Arabian goddess, and dated back to the first century BC.

Mr Abdelkarim said the statue had been covered with a metal plate and sandbags to protect it from fighting “but we never imagined that IS would come to the town to destroy it.”

IS captured Palmyra, a renowned UNESCO World Heritage site, from government forces on May 21, prompting international concerns about the fate of the city’s antiquities.

So far, the city’s most famous sites have been left intact, though there are reports IS has mined them.

Most of the pieces in the city’s museum were evacuated by antiquities staff before IS arrived, though the group has blown up several historic graves in recent weeks.