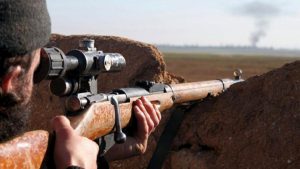 The Islamic State has deployed death squads to target civilians fleeing areas under its control in western Anbar, iraqinews.com  reports.

Quoting a local source, the agency said tens of IS snipers, armed with medium weapons, were relocated from the IS-held town of al-Qaem, near the western borders with Syria, to a desert area reaching to the government forces-held region of Rutba.

The special squads tour the deserts around al-Qaem, Annah and Rawa, with trucks and motorbikes, and had killed more than one escaping family, including women and children, according to the source.

Islamic State has maintained pockets in the three western towns in Anbar since it emerged in 2014. It holds thousands of civilians as potential human shields against any possible assault by Iraqi forces. Reports about fleeing civilians being targeted by the extremist group have become common since the government launched a major offensive against the group’s strongholds in October.

There has not been an officially-declared military campaign to free those regions, but the province’s military command launched a brief assault early January that managed to recapture some western villages before stopping again. It is believed that the Iraqi government will not aim at western Anbar before its forces are done with retaking Mosul.

However, fighter jets from the Iraqi army and the allied, U.S.-led coalition have regularly pounded IS locations in Anbar. On Monday, Nazem al-Jugheifi, a senior commander at Anbar’s pro-government popular militias, said 15 IS members, including senior commanders, were killed in an Iraqi airstrike targeting the western regions.