You are here: Home / MidEastGulf / Islamic State cowards use intricate network of tunnels to lay traps in Mosul 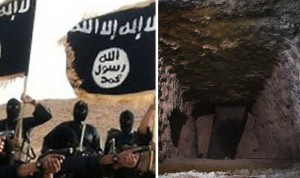 The evil jihadis are reportedly using the extensive network of tunnels to escape Kurdish and Iraqi Army troops in a war strategy modelled on the Viet Cong.

The secret enclaves provide an ideal hiding place for the sick militants, from which they can fire machine guns, throw grenades and hide suicide bombers.

In a similar tactic to Viet Cong guerrilla troops during the Vietnam War, the ruthless jihadis are also able to use the complex hideaways to house fighters, transport supplies, lay booby traps and mount surprise attacks, after which they can disappear underground to safety.

According to refugees leaving Mosul, each street in the city has a secret entrance to the underground passageways, may of which are tucked away in residential homes.

Reports claim that ISIS paid villagers $2 per day to carve out the tunnels using jackhammers to penetrate the dry bedrock.

Some of the tunnels have been found to be reinforced with metal frames and rigged with battery-powered lights, containing fridges, solar charging points, mattresses and books, resembling air raid shelters.

It is now feared the tunnels will allow ISIS lynchpin Abu Bark al-Baghdadi to slip out of the clutches of enemy troops.

ISIS’ war strategy for its showdown battle over Mosul, which al-Baghdadi declared the centre of his so-called caliphate in 2014, has so far included suicide car and truck bombers.

The crazed jihadis are also reported to have planted fields of deadly bombs in areas from which they have withdrawn, leading to further army and civilian casualties.

Waleed Abdullah, a 23-year-old Iraqi who left Mosul last month, told The Independent that among hardcore fighters “morale is still very high. They will stay underground for a long time since the tunnels are deep and provide the means of life”.

He said: “The result is inevitable. The Iraqi forces with the help of US air support will end up crushing ISIS but it will be a hard fight for that to happen.

“The enemy has had more than two years to dig into the urban landscape. He’s lighting on fire pools of oil to darken the skies and make it harder to target him.”