Pakistani defence analysts warn there is a possibility that Islamic State fighters could get their hands on Pakistan’s nuclear arsenals and make a “dirty” nuclear bomb. 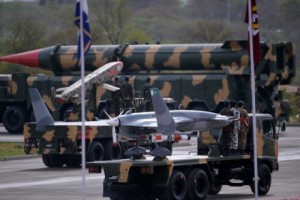 The mounting concern of an Islamic State presence in Pakistan has put the spotlight on the security of the country’s nuclear arsenal.

In February, the director-general of Pakistan’s intelligence bureau, Aftab Sultan, said hundreds of fighters from his country were joining IS in Syria, generating concerns about their links and activities when they returned home.

He also said an undisclosed network in Pakistan had been broken up.

More recently, US President Barack Obama declared at a nuclear summit in Washington: “The threat from terrorists trying to launch a nuclear attack is real. It would change the world.”

The warnings have triggered debate in Pakistan about the possibility of a “dirty” nuclear bomb.

“There is a possibility of making a dirty bomb if the militants abduct some nuclear scientists, metallurgists with some fissile materials and uranium from Iraq and Syria,” said retired Brigadier Said Nazir.

The brigadier, now a defence analyst, spent much of his career in Pakistan’s Federally Administered Tribal Areas (FATA), bordering Afghanistan.

The FATA are home to 60 militant organisations, some sympathetic to IS, according to Mr Sultan.

Zia Ur Rahman Zia, an international politics professor at Qurtaba University in Peshawar, said he believed IS could make a dirty bomb.

“They have safe havens in Iraq and Syria where it can set up a laboratory to satisfy its nasty plans,” he said.

“Pakistan’s nuclear weapons might be secure but not safe.

“An ever growing danger persists of the militants putting their hands on the country’s nuclear arsenals.”

Professor Zia pointed to the attacks in recent years on the army’s general headquarters in Rawalpindi and airbases in Mehran, Karachi, Kamra and Peshawar.

“These are not a soft target, keeping in view the track record of militant attacks on the highly secured installations in Pakistan, one can gauge the threat,” he said.

However, according to now retired Lieutenant General Talat Masood, a defence analyst in Islamabad, a terrorist-instigated attack is “technically not possible”.

“The nuclear warheads, the safety mechanism and the electronic code words all lie in different hands. How could the militants therefore know how to trigger [a device]?” General Masood asked.

But as evidence of the security of the current arsenal, retired army officer and now social sciences dean at the National University of Science and Technology, Tughral Yameen, pointed to Pakistan’s track record.

“Compared to 2000 incidents of leakages around the world, Pakistan has never witnessed a single incident of its nuclear weapons or fissile materials being stolen,” Mr Yameen said.

“It’s launching techniques are very complicated and hard to be triggered, at least by those with no know-how.”

After Pakistan’s defeat in the 1971 war against India, Islamabad formally initiated its nuclear program the following year and now has around 120 warheads.

Pakistan’s nuclear security was dealt a devastating blow over a decade ago with the admission by Abdul Qadeer Khan, the father of the Pakistani bomb, that he had secretly provided Iran, North Korea and Libya with the technical ability to develop nuclear weapons.

Pakistan’s military has long been accused of links with terrorist groups and allowing the rise of the Taliban in Afghanistan, which neighbours its lawless and porous FATA.

But some experts dismiss IS as having no viable command and control structure in Pakistan, or Afghanistan.

“How many militants are we talking of [on the ground]. On the other hand we are talking of over 700,000 professionals in the army, well trained and well equipped,” said Brigadier Mehmood Shah, a former Secretary of Security for FATA.