You are here: Home / MidEastGulf / Islamic State controls half of Syria 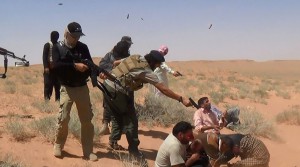 Islamic State controls more than half of Syria’s territory after its westwards advance into the central city of Palmyra, a group monitoring the war said on Thursday.

The militant group, which already controlled wide tracts of land in Syria’s north and east, captured the ancient city late on Wednesday, the first time it has seized a large population centre directly from Syrian pro-government forces.

The areas it holds are mostly sparsely inhabited. Syria’s main cities, including the capital Damascus, are located on its western flank along the border with Lebanon and the coastline and have been the priority for the Syrian military.

Islamic State fighters entered the ancient ruins of Palmyra after taking complete control of the central city but there are no reports so far of any destruction of antiquities, a group monitoring the war said.

The Al Qaeda offshoot controlled the city’s military air base, prison and intelligence headquarters, having stormed it on Wednesday, said Rami Abdulrahman, head of the Syrian Observatory for Human Rights.

Clashes since Wednesday had killed at least 100 pro-government fighters, said Abdulrahman, who bases his information on a network of sources on the ground. It is the first time Islamic State has taken control of a city directly from President Bashar Al-Assad’s army and allied forces.

Syrian state television said late on Wednesday that pro-government forces had withdrawn from the city after managing to evacuate most of its civilian population.

He told Reuters on Wednesday that hundreds of statues had been removed to protect them from destruction but that he feared for the city’s museum and large monuments.

Palmyra’s ancient monuments lie on the southwestern fringe of the modern city, which is also known as Tadmur.