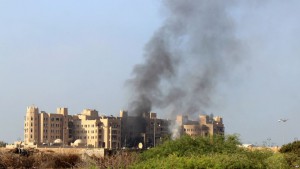 Islamic State claimed responsibility for a series of deadly attacks on the Yemeni government in Aden as well as Gulf Arab troops on Tuesday, it said in a statement released on twitter.

“In a blessed operation facilitated by God, four martyrdom operations targeted a gathering of Saudi, Emirati and Yemeni officers,” the statement said.