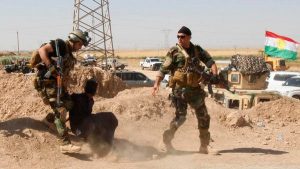 The Islamic State (ISIS) claimed responsibility for a Saturday attack on Peshmerga forces that killed three on the Erbil-Kirkuk road, like reported by rudaw.net.

ISIS claimed, via its propaganda channels on Telegram, that armed militants attacked Peshmerga barracks near Prde (Altun Kupri), north of Kirkuk city, claiming to have killed seven and wounded two others.

The militants attacked the Peshmerga’s Brigade 10 on Saturday, which resulted in a 45-minute clash. Peshmerga commander Nuri Hama Ali told Rudaw that three of his fighters were killed and two wounded.

In its weekly al-Naba propaganda newspaper released on Thursday, ISIS claimed it had carried out 38 operations across Iraq between April 21 and 28, killing and injuring 74 people.

Kirkuk is disputed between Erbil and Baghdad, like the provinces of Diyala, Salahaddin and Nineveh, where ISIS continues to launch attacks across the country, sheltering in the security vacuum void of either Iraqi or Kurdish forces.

ISIS militants ambush, kidnap and extort both civilians and members of the security forces across the disputed territories, as well as elsewhere in Iraq.

One fighter from the Popular Mobilization Forces (PMF, or Hashd al Shaabi in Arabic) was killed and three others were injured in an ISIS attack on the PMF’s Brigade 16 in Kirkuk late on Monday, Iraqi state media said on Tuesday. https://www.ina.iq/125085–.html

In a meeting with commanders and bridages on Tuesday, Minister of Peshmerga Shorsh Ismail urged tighter security in barracks in light of “recent Daesh terrorists’ movements,” using the Arabic acronym for ISIS.

The terror group on Sunday claimed responsibility for an attack on Iraqi security forces north of Baghdad that killed at least four people. Five Iraqi troops were killed in clashes with ISIS in the same area in February.

Iraqi Prime Minister Mustafa al-Kadhimi held a meeting on Sunday with commanders of the Peshmerga and Iraqi forces to discuss better coordination “in areas of joint responsibility,” as well as “security plans to confront and limit security breaches, and extend security and stability throughout the country” to counter ISIS movements, according to statement from his office.

The two forces agreed in July 2020 to establish a joint coordination office, but have carried out limited joint operations since.