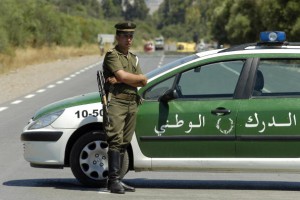 Three jihadis shot the officer in the restaurant in a northern district of Constantine.

Mouthpiece for ISIS, Amaq news, said in a statement that depraved militants shot the officer and seized his weapon during the attack, around 240 miles east from the capital Algiers.

A security official told local media: “According to witnesses, these individuals went straight to the victim as he was eating and shot him and then took his service weapon.”

Attacks are rare since Algeria ended its 1990s civil war with Islamists that killed 200,000 people.

But Al Qaeda in the Islamic Maghreb and small brigades of Islamic State affiliates are still active, mostly in mountainous areas or the remote south near the country’s borders with Niger and Libya.

The last suicide attack in Algeria was in 2011 in the same town, when a militant tried to drive a bomb-packed truck into a police station, injuring 29 people.

It comes just two months after Algerian forces said they had cleared out Islamic State-affiliated militants, known as Jund al-Khilafa, or soldiers of the Caliphate, from the mountains east of Algiers – two years after they kidnapped and beheaded a French tourist in the former al Qaeda stronghold.

Daesh has become desperate to cling onto it’s strongholds as US-led forces close in on the recapture of the Iraqi city of Mosul.

ISIS jihadis have now resorted to planting bombs inside teddy bears and hiding detonators for booby traps within innocent-looking toy cars, it has been revealed.

Horrifying examples of the wickedly disguised improvised explosive devices (IEDs) have been put on display at a training centre for bomb disposal experts as 40,000 soldiers prepare to advance on Mosul.

Colonel Nawzad Kamil Hassan, an engineer with the Kurdish forces who has been leading a team responsible for investigating ISIS’ IEDs, said: “Why would Isis use something nice, like a bear or a rabbit?

“They used this toy because they know the peshmerga [Kurdish fighters] will not touch it but children will.”