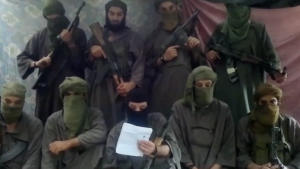 Jihadists in Algeria loyal to the Islamic State claim to have killed three Algerian soldiers, according to Aamaq News, an Islamic State news outlet. That claim, however, was not supported by reports in the Algerian media. Their short statement was translated by the SITE Intelligence Group.

“Killing of 3 Algerian soldiers following clashes with Islamic State fighters during a combing operation by the army on Mount Shakshut in Bouira province the day before yesterday,” the statement reads.

According to Algerian media, the combing operation is said to have killed two jihadists, but made no mention of Algerian soldiers being killed or wounded.

The Islamic State’s branch in Algeria, Wilayat al Jaza’ir (or Jund al Khilafah), has not claimed many attacks since its 2014 inception. The group’s most infamous claim was the capture and subsequent beheading of a French captive, Herve Gourdel, in Sept. 2014. The Algerian military has since cracked down on the group, killing its leader – former al Qaeda in the Islamic Maghreb (AQIM) commander Abdelmalek Gouri – and several other commanders in an operation in late 2014. Since then, the group has largely been defeated, claiming sporadic attacks near Constantine and now Bouira.

However, several small AQIM brigades in Algeria have defected to Wilayat al Jaza’ir. In one such instance, a group calling itself the “Al Ansar Battalion” of AQIM released an audio statement pledging allegiance to Abu Bakr al Baghdadi and the Islamic State. A day later, AQIM put out a statement from the emir of the battalion denying the entire group left AQIM’s fold. The emir, who reiterate the group’s allegiance to AQIM, said that “fewer than 10” members left to join Wilayat al Jaza’ir. (See Threat Matrix report, AQIM battalion claims ‘fewer than 10’ members defected to Islamic State.)