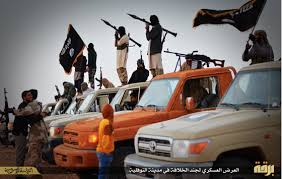 The Islamic State group claims to have seized full control of the Libyan city of Sirte from the Fajr Libya militia, including a power plant, according to a US monitor.

SITE Intelligence Group said on Tuesday that the jihadist group had published photographs of “IS fighters engaged in clashes, sitting atop heavy guns, exploring the power plant and town, as well as bodies of dead Fajr Libya fighters”.

The claim comes nearly two weeks after IS overran the airport in Sirte – the home town of slain dictator Muammar Gaddafi – in the group’s first such military gain in Libya.

SITE quoted a report in which an IS division that calls itself “Tripoli Province” said “soldiers of the caliphate” seized control of the last locations of Fajr Libya gunmen in Sirte.

The report said Sirte would now “be the coastal city linking the east and west of Libya under full control of the Islamic State (group) fighters.”

It said the capture of Sirte came after clashes that erupted at dawn saw the Fajr Libya fighters lose all entrances to the city and the power plant, as well as the Al-Jallit military camp and Al-Qardhabiyah base.
Read more at http://www.9news.com.au/world/2015/06/10/04/10/is-claims-capture-of-libya-s-sirte#WEzL5JDGt0r3DY4Y.99