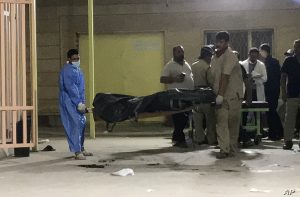 Islamic State group claimed responsibility for a deadly attack near the Iraqi Shi’ite holy city of Karbala, the group’s Amaq news agency said according to ekurd.net.

A bus bombing killed at least 12 people and wounded five people at a checkpoint north of Karbala, south of Baghdad, a statement from Iraqi security services said.

Two police spokesmen in the area said an explosive device planted on the bus detonated at a northern entrance to the city, setting fire to the vehicle.

Security forces said on Saturday they had arrested a man suspected of placing the explosives on the bus before it disembarked.

“The security forces, in coordination with the citizens, were able to arrest the perpetrator of yesterday’s blast,” Iraqi prime minister Adel Abdul Mahdi said in a press release.

Iraq declared victory against ISIS in late 2017 after three years of a brutal fightback against the extremist Sunni group, which had specifically targeted Shi’ite gatherings.

Such attacks in the mostly Shi’ite Muslim south of Iraq have been rare in recent years, especially after the territorial defeat of Islamic State in Iraq in 2017 and the routing of its al Qaeda predecessors in the mid-2000s.

Militant sleeper cells have continued to carry out hit-and-run attacks against government positions across the country, particularly at checkpoints.

The deadliest incident this year was a stampede earlier this month in Karbala that left more than 30 pilgrims dead and dozens injured.

Hundreds of thousands of pilgrims from Iraq, Iran and as far as India had been gathering in the southern city this month to mark the Shi’ite holy day of Ashura.

Iraq is expecting millions more Shi’ite pilgrims to arrive at the end of October for the annual Arbaeen commemoration, which marks the end of the 40-day mourning period for the seventh-century killing of Imam Hussein by the forces of the Caliph Yazid.