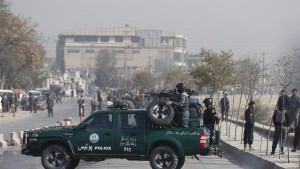 Islamic State claimed responsibility for a suicide bombing Wednesday that killed seven people in Kabul, including members of an Afghan special security unit.

Afghan officials said a suicide bomber riding a motorbike targeted a minibus carrying a unit that provides security for senior government officials and reports to the presidential palace.

Four members of the force and three civilians were killed, and more than a dozen people were wounded, officials said.

Islamic State, the militant group based in Iraq and Syria that has claimed responsibility for several recent deadly attacks in South Asia, said one of its members detonated a bomb “on a bus carrying Afghan intelligence.”

The victims were not intelligence officers, nor did the bomber board the bus, Afghan officials said.

The special security unit was also the target of a major blast near the same location in April, claimed by Taliban insurgents, that left 28 people dead and hundreds wounded.

Aisha Bek, 24, said she was standing about 150 feet away from the bombing on Wednesday morning.

“The wave of the blast shocked me,” she said. “I saw someone in a Afghan military uniform thrown out of the vehicle.”

Even as Islamic State faces assaults on its strongholds in Iraq and Syria, its allies have carried out deadly violence in Afghanistan and Pakistan.