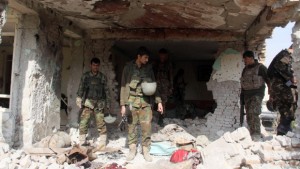 The Islamic State’s Wilayat Khorasan, or “province” in Afghanistan and Pakistan, has claimed responsibility for an attack on the Pakistani consulate in Jalalabad, Afghanistan earlier today. The jihadists laid siege to the consulate for several hours.

The Islamic State issued a statement (in multiple languages) describing the assault. The English-language version, which was posted online, can be seen on the right.

The group says that “three inghimasi fighters” were responsible for the operation. The word “inghimasi,” roughly translated, means they willingly went to their deaths, or served as suicide operatives. The first detonated his explosive belt, paving the way for the other two to infiltrate the consulate. The second then detonated his suicide belt, while the third supposedly “returned to mujahidin positions safely.”

“The operation lasted for approximately four hours during which the building was destroyed and dozens of consulate staff were killed including a number of apostate Pakistani intelligence officers,” the “caliphate’s” arm claims.

Afghan officials have offered a slightly different account to the press, saying all three jihadists, as well as seven members of the consulate’s security forces, were killed. According to Reuters, Attaullah Khogyani, “a spokesman for the provincial governor, said a suicide bomber had tried to join a queue of people seeking visas to Pakistan and blew himself up after being prevented from entering the building.”

Jalalabad is the capital of Nangarhar, the Afghan province where the Islamic State’s Wilayat Khorasan is based. Before today, the group had not executed many complex assaults in Jalalabad or other Afghan provincial capitals.

For instance, Wilayat Khorasan’s “Voice of the Caliphate” radio station recently claimed that “hundreds” of the Pakistani Inter-Services Intelligence (ISI) agency’s “mercenaries,” acting in the name of the Taliban’s “emirate,” attacked the Islamic State’s mujahideen in the Nazyan District of Nangarhar. In a December 2015 broadcast, the radio station accused Mullah Akhtar Mohammad Mansour, who became the Taliban’s emir in July, of being an “apostate” and said that “juniors” in the Taliban’s ranks shouldn’t “follow the orders of the apostate leaders.”

The Islamic State has consistently accused the Taliban of being a puppet for Pakistan’s ISI, which is the country’s primary intelligence service. It is a claim that has some truth to it, as the ISI has long backed the Taliban’s operations. The “caliphate’s” men are eager to point the relationship out, because it tarnishes the Taliban’s jihadist credentials.

It is possible that the Islamic State will use today’s operation to argue that it goes after Pakistan’s representatives in Afghanistan, while the Afghan Taliban typically does not.

The Taliban and the Islamic State’s Wilayat Khorasan have clashed on multiple occasions. Late last year, for instance, Mansour’s men reportedly beheaded several of the “caliphate’s” men. “Voice of the Caliphate” denied this, however, saying the Islamic State’s followers are not so weak that they could be executed in such a manner.