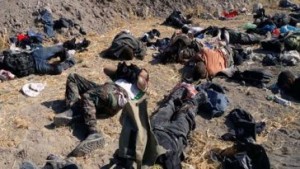 Islamic State’s supreme leader has stripped group commanders in eastern Mosul of leadership due to dramatic losses to Iraqi government forces over the past two weeks, a local source has reported to iraqinews.com .

A source told Alsumaria News that Abu Bakr al-Baghdadi withdrew the “emir” designation from all leaders of the extremist group in the eastern part of the city due to “delinquency and escaping” at battlefields in face of advancing Iraqi government troops.

“Baghdad has proscribed the occupation of any leading position by emirs in the eastern section, and to instead deploy them to the frontlines as regular fighters as a sort of punishment,” said the source, who asked not to be identified.

Iraqi government forces, backed by a aircraft and advisers from a US-led military coalition, launched two weeks ago the second phase of a major campaign that started in October to retake Mosul from IS militants. Since then, reports have been recurrent about divisions, infighting and accusations of treason among the group’s leaderships.

Iraqi military and police commanders have said recently they became in control over 90 percent of the eastern region of Mosul, and hope to move onwards to the west, where IS still maintains outstanding strongholds, and where Baghdadi is widely believed to shelter.

On Saturday, Iraqi troops have retaken the Mosul University campus, the most remarkable IS stronghold in eastern Mosul.