You are here: Home / MidEastGulf / Islamic State cells are reappearing in Syria and Iraq 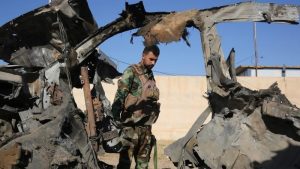 More than 100 Islamic State fighters armed with heavy machine guns and vehicles rigged with explosives attacked the gates of Gweiran Prison in the northeastern Syrian city of Hasakeh, like reported by jpost.com. The goal of the attack on Thursday was to free the inmates and to raise the morale of ISIS fighters and sympathizers in Syria and in Iraq.

This attack has turned into the fiercest battle between ISIS and the US-backed Syrian Democratic Forces (SDF) in years, and it involved sleeper cells, suicide terrorists and riots inside the prison. According to Omar Abu-Layla, an executive director of the DeirEzzor24 research and analysis organization and a former Free Syrian Army spokesman, the attack by ISIS cells and the riot within the prison were carefully planned and organized, and the time was chosen based on the weather conditions. In addition, some of the fighters disguised themselves by wearing SDF uniforms.

Gweiran Prison, the largest of about a dozen facilities run by the US-supported Syrian-Kurdish forces, holds a few thousand inmates, among them top ISIS commanders and other extremist figures. The fighting there continued for more than three days, with the Kurdish SDF forces fighting supported by US-led coalition airstrikes on ISIS-held positions in Hasakeh. According to a tweet by SDF spokesman Farhad Shami, 17 Kurdish fighters were killed and 23 were wounded, along with dozens of ISIS fighters. It is unclear how many prison inmates were able to escape. Footage of a few dozen recaptured prisoners showed men dressed in prison uniforms under civilian clothes. ISIS flags and uniforms were discovered in the area where the battles between the ISIS gunmen and SDF fighters took place.

ISIS operatives claimed responsibility for the Gweiran Prison break through its media outlet, Amaq, and announced that it was able to free 800 inmates. An SDF spokesman rejected this claim, saying that it was impossible for 800 people to leave the area without being seen and followed by SDF fighters. ISIS also took responsibility for an ambush on an Iraqi military post near Baghdad on Friday. Eleven Iraqi soldiers were killed in this incident. Since the attacks, Iraq has tightened security measures on its border with neighboring Syria and President Barham Salih tweeted, “The attempts to revive terrorism in the region cannot be underestimated.”

Experts are now wondering whether the battle at the Gweiran Prison is an indication that the dangerous terrorist group, that was able to capture large swaths of land in Syria and Iraq in 2014, is in the process of rehabilitating and will soon pose a serious threat to both countries again.

Abu-Layla believes that, despite the many countries that claimed victory over and the eradication of ISIS, the organization is still strong In Syria and has many sleeper cells placed in the country. “We also must remember that Iran is working to push ISIS to the American-controlled region,” Abu-Layla told The Media Line.

According to the SDF spokesman, in addition to Syrian citizens there also were some foreign nationals among the killed ISIS attackers. Thousands of foreign nationals, including women and children, are held in SDF-controlled prison facilities, and Abu-Layla believes that this situation is a recipe for disaster.

“The issue of ISIS prisoners remains tough and difficult to contain. Also, the Kurdish administration relies on it as a political card to attain global support and establish an international court, which is a tactic that has not always been useful for the administration,” he said.

Although the global coalition has provided the SDF with logistics and helicopters to guard the prisons, the shaky structure of the prisons still does not allow for the secure control of such a huge number of dangerous prisoners, he says. According to the expert, five attempted riots and prison breaks occurred during 2021. The current attack on Gweiran Prison was the worst, however.

“Six attempts in less than a year raise the question of the extent of the seriousness of the coalition and SDF to secure the prison well,” Abu-Layla said.

“ISIS is a complicated body, serving many masters. It also serves as an excuse for many, such as the Syrian regime that used this card to justify its other actions,” according to Assad Hanna, a former White Helmet activist, and currently an international affairs fellow at Columbia University’s School of International and Public Affairs.

In addition, Hanna told The Media Line, “the local authorities in northeast Syria like PYD (the Kurdish left-wing Democratic Union Party) and SDF accuse all of their Arabic opposition of being ISIS. The reality is that the SDF is not capable of holding them (ISIS prisoners) there for a long time, and the countries where they were citizens should deal with them at a professional level. Holding them in that prison under an annual budget which may get cut at any time (meaning that the guards will no longer be there) is not going to work.”

Prof. Uzi Rabi, director of the Moshe Dayan Center for Middle Eastern and African Studies based in Tel Aviv, says that behind the headlines of the more recent ISIS-Kurdish clashes there are also long-term ethnic tensions between the Kurds and the Arabs in northeastern Syria.

“Many of the inmates are ISIS fighters. However, there are also many family members of Arab tribes who were arrested on suspicion of being ISIS sympathizers or anti-Kurdish elements. Also, ISIS cells maintain friendly cross-border ties with many Arab tribes in Syria and Iraq who share an anti-Kurdish agenda. The tension is enormous, and ISIS is gaining power. The situation is far from being similar to the pre-2016-2017 period, and still there any many places where it gets ammunition, intelligence and support. It seems to be enough to turn ISIS into an undeniable fact on the ground,” Rabi told The Media Line.

Rabi believes that the situation in Iraq is actually worse than in Syria due to the existence of “Saddam soldiers” – Arab Sunni elements who enjoyed being in power during the Saddam Hussein-era and who are ready to fight against Shia rule in Iraq at any cost, along with ISIS or with anyone else.

Dr. Kamal Sido, a Middle East consultant at the international Society for Threatened Peoples headquartered in Germany, believes that in the absence of firm American support of the Kurds, there might be an increase in the number of Arab tribes in northeastern Syria that will support ISIS.

“They are looking at the stronger actor and trying to make the right choice. If the Americans will continue supporting the Kurds firmly, the Arabs will try to mend ties with the Kurds. However, if they will see a weak and undefined position, they might choose ISIS. I still hope that the Americans will support the Kurds in their fight against ISIS,” Sido told The Media Line.

Rabi adds that since the annihilation of the self-proclaimed ISIS caliphate, the group has resorted to a different strategy, waging a guerilla war against the SDF, Syrian and Iraqi military forces, rather than trying to recapture lost territory. He warns, however, that given the weakness of Syria and Iraq, the “Daesh-stan” – Daesh is the Arabic name for ISIS – is thriving in the border area of both countries.

Abu-Layla warns of repeated prison breaks if foreign countries do not repatriate their citizens who fought with ISIS and the maintenance of the prisons does not improve. Many foreign leaders celebrated victory over ISIS a few years ago; however, as often happens, the destructive ideology is still alive, and in volatile northeastern Syria as well as the Sunni provinces of Iraq there is no absence of those who are willing to carry again the black flags of this deadly organization.