You are here: Home / MidEastGulf / Islamic State can down aircraft as well 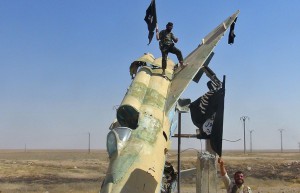 The Islamic State of Iraq and Syria (ISIS) has occupied military barracks and a water dam in Anbar province of Iraq after fierce fighting and it also claimed to have shot down a Syrian regime fighter jet conducting airstrikes on the group’s stronghold of Raqqa on Tuesday raising questions about the group’s improved military capabilities.

Though the Syrian regime claimed that the aircraft crashed for technical reasons yet we (http://pakobserver.net) have reasons to believe that it was shot down by the ISIS which has equipped its fighters with modern weaponry. Earlier the ISIS also claimed downing of a Jordanian aircraft and then brutally murdered the captured pilot.

This reflects that the militant organisation which has sprung in a brief period is increasing its capabilities and can now also bring down modern bombers. In addition to indigenous anti-Assad regime groups, ISIS and al-Qaeda have joined the fighting to have their share in the cake. Fighters of Syria’s Al-Qaeda affiliate and its allies overran the last major government-held city in the northwestern province of Idlib on Saturday.

With the passage of time the ISIS is expanding its territory in Iraq and Syria despite US bombing on their positions in Iraq and beefed up security forces with the help of militia and friends in neighbouring countries. ISIS fighters also ambushed an Iraqi army convoy on Friday with a bulldozer packed with explosives killing the commander of Iraqi Ist Division Brig. Gen. Hassan Abbas Toufan and three of his staff officers north of Fallujah.

The attacks represent a setback for the Iraqi army which is embroiled in a fierce battle to reconquer western Anbar province. Many Iraqis blame rivalries among the country’s political leadership for the humiliating defeat suffered by government forces in the past year at the hands of the ISIS militants that control large sections of the north and west of the country. We may caution the international community that ferocity and lethality of ISIS is increasing and there is dire need to cut all its supply routes and bring an end to social fragmentation in Iraq and Syria, if the major powers including US are serious to defeat ISIS.