You are here: Home / MidEastGulf / Islamic State can arm itself with nuclear weapons bought from Pakistan 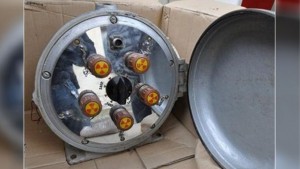 The Islamic State’s claim that it has the capability and resources to acquire nuclear weapons within the year is something that India considers a credible threat.

Speaking at a conference in Singapore last Saturday, Rao Inderjit Singh, India’s Minister of State for Defence, expressed fears that ISIS could soon acquire a nuclear weapon bought from Pakistan, saying that the Islamic extremist group has the capability and resources needed to buy such a weapon.

“With the rise of ISIS in West Asia, one is afraid to an extent that perhaps they might get access to a nuclear weapon from states like Pakistan,” Singh said in a report that came out in the Gospel Herald on Tuesday.

Singh said if Pakistan gets the chance to create technology that would enable its submarines to bear nuclear warheads, “it would just be a step further in arming their defence services.”

The militant group claimed it is “infinitely” closer to obtaining a nuclear weapon from Pakistan, saying it is capable of carrying it secretly into the United States.

“The Islamic State has billions of dollars in the bank, so they call on their wilayah [province] in Pakistan to purchase a nuclear device through weapons dealers with links to corrupt officials in the region,” according to the Gospel Herald story, quoting British photojournalist named John Cantlie.

Once ISIS has purchased such a weapon and smuggled it to the US border, the militants would be able to camouflage themselves among the millions of other illegal immigrants trying to gain access into the US through the southern border, Cantlie said.

“Perhaps such a scenario is far-fetched but it’s the sum of all fears for Western intelligence agencies, and it’s infinitely more possible today than it was just one year ago,” he said.

“And if not a nuke, what about a few thousand tons of ammonium nitrate explosive? That’s easy enough to make,” Cantlie added.

However, a security expert downplayed such claims of ISIS, saying it is very unlikely for Pakistan to sell nuclear weapons to the terrorist group.

“It would be suicidal for Pakistan to supply them and suicidal for ISIS to seek to acquire them. It would lead to immediate military intervention,” said Anthony Glees, director of the Centre for Security and Intelligence Studies at the University of Buckingham.

“However it is possible that ISIS might try to acquire nukes from somewhere, but if so, all Western intelligence agencies would be on the highest alert to prevent this.”

“As for getting non-nuclear explosives, well that would indeed not be hard. But they’re not nukes, I can’t believe ISIS could acquire nukes. ISIS is swaggering and posturing. It is taunting both us in the West but also other Middle Eastern states and embarrassing Pakistan at the same time.”

But while ISIS’ purchase of that kind of weapon is not likely, the group’s increasing control of Iraq and Syria is “desperately bad news” for the West, he said.