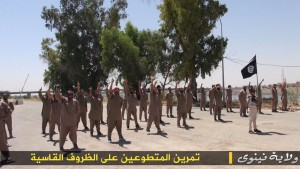 On Tuesday, Judicial Watch said that ISIS, the militant group that has taken large areas of Iraq and Syria, is operating a camp a few miles from El Paso, Texas. Sources, which reportedly include a field-grade Mexican Army officer, say the camp is about eight miles from the U.S. border with Mexico.

“These specific areas were targeted for exploitation by ISIS because of their understaffed municipal and county police forces, and the relative safe-havens the areas provide for the unchecked large-scale drug smuggling that was already ongoing,” Judicial Watch added. But the situation is much worse, the sources said.

ISIS allegedly has “spotters” in the East Potrillo Mountains of New Mexico, an area “largely” managed by the Bureau of Land Management. The terror group is also conducting reconnaissance of the sprawling White Sands Missile Range, government facilities in Alamogordo and universities in the area. Electrical power facilities near Anapra and Chaparral, N.M., are also targets.

Last year, Sheriff Gary Painter of Midland County, Texas, warned that ISIS militants are preparing to sneak into the United States through the southern border with Mexico. Some, he added at the time, have already crossed into the country. A few days earlier earlier, a leaked document warned of an ISIS-related threat across the border.

News of the camp comes on the heels of a newly-released video threatening another 9/11-style terror attack. The militant group also said there is “no safety” for any American citizen.

“America thinks it’s safe because of the geographical location,” the propaganda video said. “Thus you see it invades the Muslim lands, and it thinks that the army of the Jihad won’t reach in their lands. But the dream of the American to have safety became a mirage. Today there is no safety for any American on the globe. The mujahedeen before, although they had less resources, attacked New York and bombed the Twin Towers in September 11 attacks. That blessed incursion was a fatal blow. All praise is due to Allah, the American economy was shaken.”