You are here: Home / Senza categoria / Islamic State calls for attacks on Halloween celebrations: ‘Get out before it’s too late’ 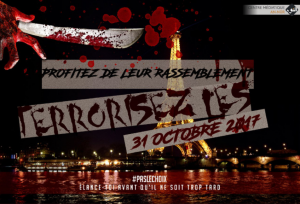 A pro-ISIS media group circulated an image today of a knife dripping blood over the Eiffel Tower, calling on lone jihadists to attack on Halloween, like reported by pjmedia.com.

“Enjoy their gathering,” reads the text superimposed over the image. “Terrorize October 31.”

Added was the hashtag #Paslechoix: “no choice.” Below that was the message, “Get out before it’s too late.”‘

It was produced by Centre Médiatique An-Nûr, which has produced in French not only videos about jihadist operations but about how online jihadis can practice web security. The group also distributes ISIS’ Rumiyah magazine, which has not yet been published this month, in French.

The image was shared by a Twitter account that distributes caliphate news, images and videos in French.

The threat came on the same day that French President Emmanuel Macron signeda controversial counterterrorism law that supplants the state of emergency that has been in effect since the November 2015 terror attacks that claimed 130 lives around Paris.

Under the law, security officials have the permanent ability to shut down houses of worship deemed to be hotbeds of extremism, and will not necessarily need a warrant to search the homes of terror suspects. They will also be able to contain terror suspects to their home neighborhoods and conduct more targeted identity checks near the borders and at transportation hubs.

The state of emergency, which has been extended six times since the 2015 attacks, expires Wednesday. Macron said the new law, which will be reassessed in two years, could go into effect on Halloween.

Macron tweeted a photo of the bill signing, saying it will be “strengthening the security of our citizens.”

A poll by Le Figaro found 57 percent of French backing the new security measures while 62 percent said they infringed on civil rights.

ISIS claimed responsibility for the stabbing deaths of two young women at a Marseille train station at the beginning of the month. The killer, Tunisian illegal immigrant Ahmed Hanachi, was shot dead by police.