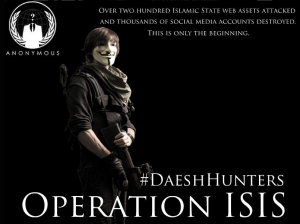 The militant group, communicating on a Telegram channel — a messaging app — warned its followers to not open any website links unless they are sure of the source. The group also warned followers to avoid talking on Telegram or through Twitter direct messaging, and to change Internet protocol addresses continually.

“The #Anonymous hackers threatened in new video release that they will carry out a major hack operation on the Islamic state (idiots),” the statement, posted in both Arabic and English, read in part.

“What they gonna hack?,” the IS said, noting Anonymous’ hacks have been limited to IS-affiliated Twitter accounts and email.

Monday, Anonymous declared war on the IS — also identified as Daesh, ISIS and ISIL — in response to attacks in Paris that killed at least 129 people.

“War is declared. Get prepared. Anonymous from all over the world will hunt you down. You should know that we will find you and we will not let you go. We will launch the biggest operation ever against you. The French people are stronger than you and will come out of this atrocity even stronger,” Anonymous said in a two-minute video.

Anonymous has a history of launching cyberattacks against entities with which it disagrees. PayPal, Mastercard and the Church of Scientology are among the victims of its attacks.

Anonymous temporarily took down a French jihadist website in January, following the killing of 12 people at the Paris-based magazine Charlie Hebdo. The attackers identified themselves as members of al-Qaida’s Yemen branch.

Earlier this month the hackers identified 1,100 alleged members of the Ku Klux Klan, posting the names on its website. It also organized a worldwide protest, known as the Million Mask March, earlier in November.