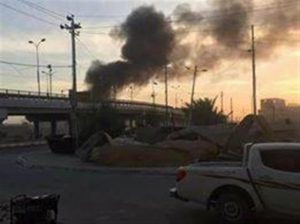 Islamic State booby-trapping expert was killed along with three of his aides due to a blast inside a workshop in Tal Afar town, west of Mosul, a local source in Nineveh said, like reported by iraqinews.com.

“Abu Yusuf al-Halabi, a prominent expert of vehicles booby-trapping in Tal Afar, was killed along with three of his aides due to an explosion of a car while booby-trapping it inside a workshop,” the source told AlSumaria News on Thursday.

The source, who preferred anonymity, added that “al-Halabi was a Syrian national in his forties. He was called as ‘al-mohandis’ [Arabic for ‘the engineer’]”

Earlier this week, another militant, called abu-Yusuf, in charge of one of the group’s defense lines, was killed by a sniper in the vicinity of Tal Afar.

Tal Afar is one of the important strongholds still held by IS in Nineveh.

The group has sustained severe losses in personnel and ground since an offensive was launched in mid October to retake Mosul, the second-largest Iraqi city and the militants’ last urban stronghold in the country.

The number of Islamic State fighters remaining in Mosul was recently estimated by Iraqi troops at 200 to 300, mostly foreigners, down from nearly 6,000 when the offensive started.