Suicide attack on checkpoint near the Syrian border claimed by IS, which is still mounting attacks in the region, like reported by middleeasteye.net 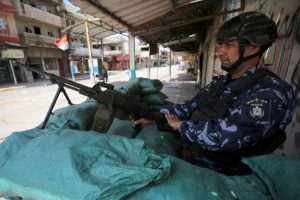 A suicide car bomber killed at least 16 people and wounded more than a dozen others at a checkpoint in the town of al-Qaim in western Iraq’s Anbar province on Wednesday.

The Islamic State group (IS) claimed the attack hours after it took place via its mouthpiece Amaq news agency.

Iraqi police officials told AFP that 11 civilians and five security personnel died when an explosives-laden car was driven into a checkpoint in the town on the Iraqi-Syrian border.

Following the incident, Iraqi authorities announced a curfew in the area.

The checkpoint was being manned by Iraqi army soldiers and government-backed militiamen.

Security officials told Reuters news agency that the death toll could climb as some of the wounded were in a critical condition.

Sky News Arabia reported that the death toll had climbed to 21 people.

Al-Qaim, which lies some 340 kilometres from the capital Baghdad, was one of the last towns in Iraq to be controlled by IS, and was recaptured by Iraqi forces in November.

One month later, Prime Minister Haider al-Abadi declared victory over the IS militants.

Since then, though, security forces have announced some campaigns to flush out the last remaining IS fighters from sparsely populated areas from which they have continued to mount attacks.

The vast desert that straddles the border with Syria on either side of the Euphrates valley town of al-Qaim has been one of IS’s main hideouts.

Home to approximately 150,000 people, the town is notorious for being a crossing point for arms and money used to fuel the group’s operations.