You are here: Home / MidEastGulf / Islamic State blows up two bridges near borders with Syria 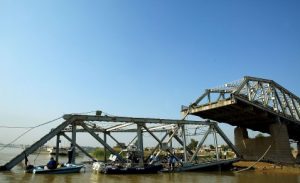 Islamic State has blown up two bridges on the international highway in west of Anbar province, tribal forces declared, like reported by iraqinews.com.

“IS fighters blown up two pivotal bridges on the international highway, east of al-Waleed crossing on the borders between Iraq and Syria,”Shaker al-Rishawi, a senior commander of the Tribal Mobilization forces in Anbar, told AlSumaria News on Tuesday.

“The blast was carried out using amounts of explosives which made the bridges fall,” Rishawi said.

On Monday, the international coalition led by the U.S. foiled a suicide attack by IS militants who were using two booby-trapped vehicles at the border crossing.

Violence in the country has surged further with the emergence of Islamic State Sunni extremist militants who proclaimed an “Islamic Caliphate” in Iraq and Syria in 2014.

IS still holds three towns in western Anbar close to the borders with Syria, in addition to a few areas in Salahuddin, Diyala and Kirkuk. It is believed that the group has begun escalating attacks outside the city of Mosul, where the group has been losing ground and personnel since October.

Fighter jets from the Iraqi army and the international coalition have also regularly pounded IS locations in the province. The Iraqi government is expected to aim at those strongholds once the Mosul battle is concluded.