You are here: Home / MidEastGulf / Islamic State blocking flow of Euphrates from Syria 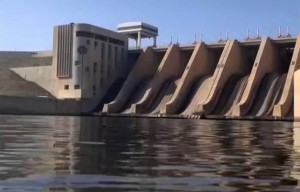 ISIS has been blocking the flow of the Euphrates River from Syria in a renewed bid to turn the vital waterway into a strategic weapon against the Iraqi government.

“ISIS closed the Tabqa Dam in Syria almost a week ago, causing the water level of the Euphrates River to drop in Anbar’s towns,” a member of the Anbar Provincial Council said Sunday.

Hamid al-Dulaimi warned in an interview with Iraqi Kurdish Bas News that the closure poses a “disaster to Anbar and other provinces” in Iraq.

Meanwhile, a source close to ISIS told Al-Jazeera that the group was using its control over the dams to “put pressure on the Iraqi government as part of the open war between it and the group.”

As concerns rise in Iraq, one official called on the international coalition fighting ISIS to conduct air strikes against the dam, although any such move would threaten water storage and raise the potential of devastating downstream floods.

“We call on the international coalition forces to strike one of the gates of the Tabqa Dam in Syria to allow water to flow into Iraq,” Anbar Provincial Council member Eid Ammash said in a statement carried September 5 by Iraqi broadcaster Sumaria News.

ISIS has already been using water as a weapon in Iraq, closing off gates in the Ramadi Dam along the Euphrates in early June to cut off water supplies to government controlled areas downstream.

CNN reported at the time that Ramadi move was making it easier for ISIS militants to attack the nearby government controlled towns of Husaybah and Khalidiyah as well as a base in Habbaniya.

ISIS controls the Tishreen Dam on the eastern edge of the Aleppo province as well as the Tabqa and Baath dams located further downstream the Euphrates, all three of which produce hydroelectric power and in conjunction regulate the flow of the river.

An engineer working in the Tabqa Dam told Al-Jazeera on Monday that the water stored in the dam’s Lake Assad reservoir has reached its upper limit, which is 304 meters high.

He said that because the dam has stopped operating electricity has been cut off in most villages in the Raqqa province for a week.

However, ISIS did partially restore power on Friday night, he added.

The pro-rebel All4Syria news outlet echoed his comments, citing local sources near the Tabqa Dam as saying that water levels in Lake Assad have risen “dramatically” due to the cutting of the flow of the Euphrates.

At the same time, the residents added that a number of the dam’s turbines have stopped operating, leading to electricity cuts in the area.

The blocking of water flow into Anbar threatens a number of serious consequences for the vast Iraqi desert province where government troops and the Popular Mobilization Militias are waging a campaign against ISIS.

A local official said that the reduced water level had caused “dryness in vast expanses of agricultural land and the failure of the generators in the Haditha Dam.”

“The deceasing water levels have caused the failure of the drinking water purification plants connected to the systems that transfer from the Euphrates,” he also warned.

“The giant pipes that transfer water have been blocked because they drew in mud and aquatic plants when stretches of [the Euphrates] River in Anbar dried up.”