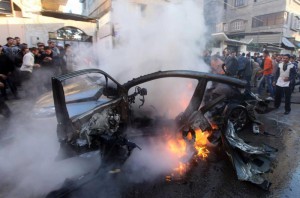 Isis has been linked to at least four bombings that ripped through Gaza City, targeting cars belonging to key Hamas officials.

No one was killed in the attacks outside the homes of local officials in Gaza City’s Sheikh Radwan neighbourhood but an official from a nearby hospital said a young woman and a man were slightly injured.

There was no claim of responsibility but witnesses reported seeing a freshly painted Islamic State flag at the site of the explosions.

Isis has stepped up its attacks on the ruling faction Hamas in recent months after it launched a fierce crackdown on alleged supporters of the terrorist group.

Earlier this month, ISIS released a propaganda video where they threaten to overthrow Hamas because they were preoccupied by nationalistic and secular concerns and were not extreme enough.