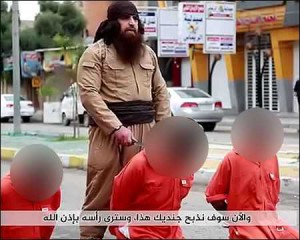 An Islamic State (IS) militant has beheaded a Kurdish Peshmerga prisoner in an extremely graphic IS video purportedly filmed in Iraq.

The harrowing footage shows the bearded IS fighter, thought to be of Kurdish origin, ranting to the camera and threatening Peshmerga forces and the Iraqi Kurdish leader Massoud Barzani.

The propaganda video comes as IS have suffered heavy losses north of Raqqa, with Syrian Kurdish forces gaining significant ground in Hasakah province.

The video shows beheading only one Peshmerga and warns of execution the two others.

The Peshmerga Ministry in Iraqi Kurdistan announced on Tuesday that they are not confident about whether the beheaded man in the execution video released by Islamic State (IS) on Tuesday is a Peshmerga or a civilian.

“We have yet to determine if the individual beheaded by IS is a member of the Peshmerga or a civilian,” Hazhar Omar, a Peshmerga official, told Rudaw.

“The Peshmerga ministry has started an investigation to identify this individual,” Omar added, “And most of the Peshmerga commanders have been informed.”

Mariwan Naqshbandi revealed detailed information about the IS executioner and the released footage of the beheading of a Peshmerga captive yesterday, March 28.

“The IS executioner has Iranian citizenship” and “It took IS militants 3 days, 50 IS militants and 4 cameramen to manage to take the video of the beheading since the captives were constantly shouting the mottos like ‘Long live Kurds’, ‘Long live Kurdistan’ and ‘Long live Peshmerga’, forcing the extremists to postpone the recording several times,” Naqshbabdi revealed to BasNews, citing a source form inside Mosul.

The IS executioners first attempted to record the footage of the beheading while the captives’ eyes are uncovered, but the captives’ relentless shouting of mottos supporting Peshmerga kept the extremists from recording the footage.

Therefore, they were forced to cover their eyes preventing them from realising they are being recorded, Naqshbandi said.

The Kurdish official argues that the release of this beheading footage is mainly to terrify the Kurdish IS militants thinking of escaping the group.

The gains with Kurdish forces come as IS struggles to prevent losses in northern Iraq, having already lost territory at Tikrit, Kirkuk and more recently near Baghdad at Ramadi.

The next major target in Iraq for government forces and Shiite paramilitary groups has long been thought to be the retaking of the key city of Mosul.

Questions remain how easy it will be to re-capture the stronghold, where IS have dug in and established significant defenses.

Much of the video seems to be made up of old archive footage from IS’s battles on the frontline, interweaved with news coverage of attacks.

The video seemingly focuses on the recent airstrikes in Syria and Iraq on IS territory, claiming the executions were in retaliation for the death of civilians.

The remaining final minutes of the video are too graphic to describe with the bearded executor murdering the three blindfolded prisoners in red jumpsuits, according to The Sun.