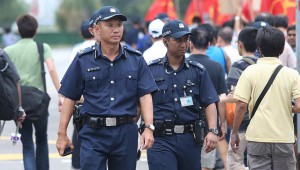 Singapore has been identified as a possible target for attack by a recent Islamic State in Iraq and Syria (ISIS) posting on social media.

ISIS supporters from the region have also cited the Philippines and the United States as targets, the report’s author, S. Rajaratnam School of International Studies analyst Jasminder Singh, told The Straits Times.

This development comes as Malaysia last month nabbed a cell with explosives targeting Putrajaya and the federal Parliament, and as Singapore’s Home Affairs Ministry on Wednesday announced the detention of a 19-year-old student who made plans to join ISIS in Syria and carry out attacks here.

It is not the first time Singapore has been cited by radicals. Last year, extremist English-language magazine Resurgence cited the Phillip Channel and Sembawang Naval Base in a piece on how militants could attack at sea.

The threat to Singapore and the region is set to grow as ISIS’ Malay archipelago combat unit, Katibah Nusantara, formed in Syria last August for Southeast Asian fighters who find it easier to communicate in Bahasa Indonesia and Malay rather than Arabic, gains ground.

While they make up a small proportion of over 30,000 foreign fighters from 90 countries, the unit scored its first major combat success last month, seizing five Kurdish-held areas in Syria.

The unit is likely to gain importance in ISIS’ strategic goal of setting up a worldwide caliphate, with returning fighters mobilised to undertake attacks and even declare a new branch in this region.

“The downward slide of jihadist appeal and success since 2009 has been reversed by Katibah Nusantara’s success in Iraq and Syria,” Singh wrote.

He said Malaysian fighters have also seized on local issues like the push for an Islamic penal code to win support. More recently, ISIS sympathisers online have called on Rohingya fleeing persecution in Myanmar to go to Syria.

Hence, the strategy to counter this influence has to be multi- pronged, from engaging the community to exposing ISIS’ evils online. Muslim leaders worldwide are also leading the effort to counter ISIS, he added.

They include Singapore’s Mufti, Dr Fatris Bakaram, who said it was a religious obligation for Muslims here to report to the authorities those who pose a threat.