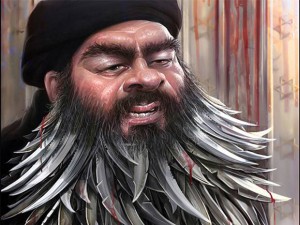 Caliphate, Islamic State, ISIS, Sunnistan, Jihadistan… Whatever name we give it, an entity is emerging in the heart of the Middle East, a sprawling swath of territory located between Mosul and Baghdad (Iraq) in the east, and Aleppo and Damascus (Syria) in the west. Inside this zone, as borders are disappearing and populations shifting, a new power is seeing the light of day whether we like it or not.

As its name suggests, the ISIS organization (or Islamic State) has a project that by far exceeds a simple political-military group or local terrorist network. ISIS, which was born from the explosive crossing of violent Salafism and Iraqi Baathism, is an unprecedented project that aims to give Iraq and Syria’s Sunni Arabs an alternative country, ruled by the sole precepts of Islam in its most rigorist form.

Unlike al-Qaeda, which is a secret, nomad and elitist organization, Abu Bakr al-Baghdadi’s ISIS claims above all to be a state, with all its symbols of sovereignty: a territory, ministries and administration, a police force and army, a judicial system, social and medical services, a civil status, currency, media and even vacation centers.

The project is summarized in the single slogan “Baqiya” — along with the forefinger pointing to the sky, signifying there is only one god — which has become the rallying cry of the caliphate declared by al-Baghdadi on June 29, 2014: the expression, meaning “eternal” or “everlasting,” is a reference to the permanence of the ISIS project, whatever its fate will be.

The double Salafist and Baathist origin of the movement can be found in the very structures and the mode of governance of ISIS. From Salafism, it borrowed the references to the mythological “purity” in the roots of Islam: the caliphate, a prestigious and uncontested reference within Muslim history; sharia as sole penal code; beheadings with sabers, like in the days of the Prophet, and so on.

If the caliphate appeals to so many people today, it’s because it arrived after the failure of the “Arab Springs,” almost all of which ended in blood baths. In Egypt, the overthrow of the Muslim Brotherhood by the army in 2013 finished convincing the Islamist supporters that democracy was not an option for achieving power.

These codes that draw in the roots of a fantasized original Islam are passed on, with a consumed talent for propaganda, through an imagery that perfectly integrates the Western codes of the Promethean hero sacrificing himself for the good of the community.

It’s notably the case with the tribute videos to “martyrs,” which are just, in fact, kamikazes used as guided human bombs. It’s this falsely naïve and ultra-sophisticated imagery that has a great power of attraction imposes itself on more than 200,000 individuals, longtime Muslims or freshly converted, emigrated from Western countries or the rest of the Arab world to the caliphate, this new “land of Islam,” in order to live their faith, their radical political commitment or their lust for violence.

But to maintain its control on a territory covering a third of Iraq and half of Syria — almost as big as the United Kingdom, Moussa Bourekba points out in the online magazine Orient XXI — all the expertise of Saddam Hussein’s former officers was required.

The iron discipline of Iraqi Baathism can indeed be found in the obsessive meticulousness of the statistics published by ISIS on the attacks it carries out. In the same way, ISIS’ “caliphate” is subdivided into provinces, which all count a governor at their top. The latter, who also serves as military chief, is systematically paired with a local intelligence service that reports only to the supreme leaders based in Mosul: a typically Baathist surveillance method, borrowing more from the Stasi of the former East Germany than from the Prophet.

Finally, the caliphate project of abolishing borders between Iraq and Syria, inherited from the colonial era, corresponds perfectly to Saddam Hussein’s Pan-Arabic message that he was the shield against the ancient military threat in neighboring Persia, during its long conflict with Iran through the 1980s. And, no matter how secular he was, Saddam gladly claimed the legacy of Qadisiya, the battle that saw the Muslim Arabs defeat the Sassanid Persians in 636.

But it is not symbolic references to the past that accounts for the success of the “caliphate” proclaimed by Abu Bakr al-Baghdadi over the past year in the face of combat from an international coalition, as well as the Iraqi and Syrian states. What has driven ISIS forward most of all is the political marginalization of Iraq’s Sunnis after the American invasion in 2003, and Syria’s Sunnis who formed a majority but have been repressed since the Assad family, which came from the Alawite minority in 1970, reached power.

Such a dynamic is also the reason ISIS tends to be defeated as soon as it ventures out of its Sunni territories, notably in the Kurdish city of Kobani, and why it refocused all its efforts on Ramadi (Iraq) and Palmyra (Syria), the ultimate Sunni strongholds. As long as a political solution to the Sunni problem is not found, ISIS will have a rosy future.