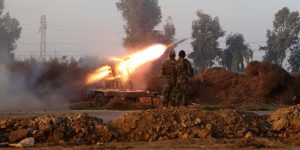 The Islamic State (ISIS) resumed their assault in the southeastern countryside of Homs this morning, striking the Syrian Arab Army’s (SAA) positions near the town of Muhasah, like reported by almasdarnews.com.

ISIS began their attack by heavily shelling Syrian Arab Army’s positions near Muhasah, prompting the latter to respond with a barrage of missiles and artillery.

Intense clashes would breakout between the Syrian Army and ISIS terrorists shortly after the exchange of missiles and artillery, with the latter taking the offensive in a bid to capture the 16th Air Defense Regiment.

The 16th Air Defense Regiment is one of the Syrian Army’s most important air defense bases in this region of Syria; it was at this location that the Syrian Air Defense was able to shoot down the Israeli F-16 jet.