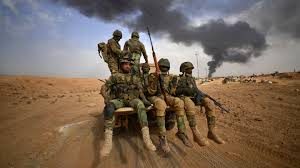 Islamic State (IS) militants carried out a large-scale armed assault against the Shia militias of Hashd al-Shaabi overnight on Monday in Anbar province, like reported by basnews.com.

Ahmed Nasrallah, head of Hashd al-Shaabi operation command in the western Iraqi province, confirmed in a statement that the attack was the largest after the IS attack last month.

He did not reveal possible casualties, but said that the jihadists used rockets to cover the attacking militants using medium and light arms.

Iraq declared full victory over IS in December 2017. Despite the declaration and the killing of IS’s first-in-command Abu Bakr al-Baghdadi, the group remains a serious threat to the stability of Iraq and the entire region.