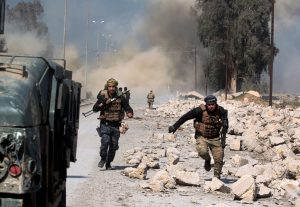 The Islamic State (IS) jihadists on Tuesday attacked the Iraqi army in the disputed Kurdish town of Tuz Khurmatu, a police officer has confirmed, like reported by basnews.com.

Khalid Mohammed, a police officer in Tuz Khurmatu, told BasNews that the incident occurred in the area of Zarga located between Tuz Khurmatu and Tikrit where the insurgents targeted a unit of the national army.

The extremists also exploded a number of bombs in the area, Mohammed said, noting that no possible casualties or serious damages to materials were immediately known.

Elsewhere in Jalawla, the Islamic State jihadists fired multiple mortar rounds at the village of Eslah without resulting in any casualties, Khalil Khwadad, a Patriotic Union of Kurdistan’s (PUK) representative in the area, confirmed to BasNews.

“One of the mortar rounds has targeted a civilian car which resulted in material damages to it,” he said.