You are here: Home / Analysis / Islamic State attacks in Syrian regime strongholds were an unusual move 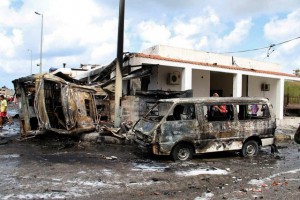 Mass casualty attacks on civilians launched by ISIL in Syria, Iraq and elsewhere arouse little surprise these days. But when bombs ripped through coastal regime strongholds in Syria earlier this week, killing more than 170 people, the assault did not fit with the extremists’ usual strategies in Syria.

ISIL’s attacks abroad serve to build the group’s brand and stoke feelings of fear, helplessness and that anybody, anywhere can be a target. In Syria meanwhile, where ISIL finds itself fighting on multiple fronts, the group’s attacks are generally more pragmatic and launched in areas that the extremists are either contesting or defending.

Monday’s attacks struck Tartus and Jableh, two seaside towns located on Syria’s western coast, which is firmly under regime control and regarded as one of the safest areas of the war-torn country. This coastal area is the historical homeland of the Alawite sect that Syrian president Bashar Al Assad’s family belongs to.

But ISIL holds no territory in either Latakia or Tartus, Syria’s other coastal province, which are separated from the extremists’ main swathes of territory near Aleppo and in the eastern desert by huge chunks of rebel, Al Nusra and regime-held territory.

The latest attacks far from ISIL’s self-proclaimed caliphate could be an effort to boost the group’s reputation as an anti-government force at a time when its rival, Al Nusra, increasingly shows signs of consolidating power and building its own state in Syria.

Unlike ISIL, Al Nusra is well-regarded by many rebel factions in Syria and considered a key force behind rebel successes against the government. Whereas ISIL fighters are seen as outsiders with no interest in Syria’s future, Al Nusra is seen by many as an organic part of the revolution that began in 2011.

ISIL does fight the regime, but only along its borders. The group has been largely absent from the battles for main regime strongholds that other rebels and Al Nusra have been involved in. Its aims have not been to take over Damascus or overthrow the government, but rather to cement control over its caliphate.

In striking the regime where it feels most safe, ISIL could be trying to portray itself as deeply locked in the same fight as other rebels and Al Nusra. The group’s long dormant Wilayat Al Sahel – or coastal state – took responsibility for Monday’s attacks, perhaps signifying that ISIL plans on ramping up activities in that area.

The attacks – as well as a recent rise in bombings in Baghdad – could also be signs of ISIL puffing out its chest as it prepares to face major assaults on its territory this summer.

On Monday, Iraqi military forces and Shiite militias began a long-anticipated push on the ISIL-held city of Fallujah in Iraq’s Anbar province. And on Tuesday, a US-backed force led by the Kurdish YPG militia announced it had begun a major offensive toward Raqqa, ISIL’s de facto capital.

These assaults will place significant strain on the group and with potential territorial losses on the horizon, ISIL may be trying to underline that it remains capable of carrying out large-scale operations – and surprising its enemies.