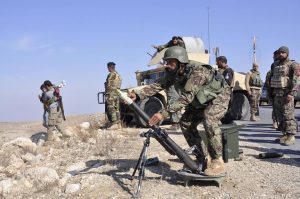 A major attack by the militants affiliated with the Islamic State of Iraq and Syria /ISIS) terrorist group was repulsed in northern Jawzjan province of Afghanistan, leaving several militants dead or wounded, like reported by khaama.com.

The 209th Shaheen Corps of the Afghan National Arnmy in thr North said a large group of ISIS militants launched a large scale attack in Darzad district but their attack was repulsed by the security forces.

The source further added that nine militants were killed and thirteen others were wounded after the Afghan forces responded to the militants attack.

According to Shaheen Corps, the attack was launched on security posts of the Afghan National defense and security forces but did not elaborate further if the Afghan forces suffered any casualty or not.

The anti-government armed militant and terrorist groups have not commented regarding the report so far.

Jawzjan is among the relatively volatile provinces in the North where the anti-government armed militant groups including the Taliban insurgents are actively operating in some of its districts.

At least fourteen militants affiliated with the terror group were killed during the airstrikes conducted in this province earlier this month.

The 209th Shaheen Corps of the Afghan Military in the North said at least two foreign nationals hailing from Uzbekistan were also among those killed.

The Shaheen Corps further added that the airstrikes were carried out on ISIS hideouts in Sardara, Maktab Imam Bukhtari, Bibi Maryam, Aqsai, and Maimana Qeshlaq areas of Darzab.