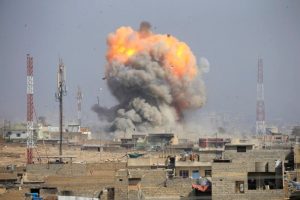 An Islamic State intelligence official died Wednesday when U.S.-led coalition airstrikes targeted him in western Mosul, according to the Iraqi Directorate of General Military Intelligence, like reported by iraqinews.com.

The directorate said it had received information that Ahmed Khaled Najm, aka Abu Obaida, was killed in an airstrike while moving on a motorbike at al-Zanjili district.

Iraqi forces recaptured the eastern side of Mosul in January after three months of fighting with IS, and sat on a new offensive in February to retake the western region. Commanders said earlier this month that the Islamic State was controlling only less than seven percent of Iraqi territory, and that only six districts remained to declare western Mosul free from militants.

IS has lost many of its senior commanders since operations launched to retake the western side of Mosul.

Iraqi police commanders said earlier on Wednesday they recaptured 30 percent of western Mosul’s Old City, a strategic IS bastion which is viewed as vital for realizing final victory over the extremist group.