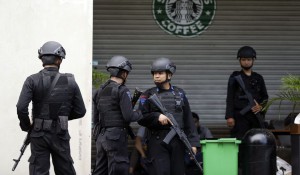 As Islamic State branches out from its base in Syria and Iraq, fears are mounting here that Southeast Asia is emerging as a new target of opportunity for the violent jihadi group.

In some cases, Islamic State, also known as ISIS and ISIL, is supplanting established radical Islamist groups — often with ties to the rival al Qaeda — and in other cases is linking up with local jihadi groups that have long battled governments in the region.

A relentless U.S.-led bombing campaign in Islamic State’s Middle East stronghold has forced the group into a tactical retreat there, but has also had the effect of steering many hard-line insurgents to return home to their country of origin, where authorities fear their notoriously harsh brand of warfare — and the lessons they learned in Syria — will spread.

Just in January, Islamic State leaders claimed responsibility for a strike in Jakarta that left seven people dead, and issued an open threat to Malaysia that it would attack if the government pursued its harsh crackdown on Muslim extremists.

The Katibah Nusantara, a unit of Southeast Asians who fight for Islamic State in Syria, with roots dating back to the Soviet occupation of Afghanistan, issued the warning last week to the government in Kuala Lampur.

“If you catch us, we will only increase in number. But if you let us be, we will be closer to our goal of bringing back the rule of the caliph,” it warned Malaysian officials in a video. “We will never bow down to the democratic system of governance as we will only follow Allah’s rules.”

U.S. and Western intelligence analysts have long feared the Islamic State would try to export its violent extremist model beyond its Middle East base. In addition to spectacular Islamic State-inspired attacks in places like Paris and California, the group has established a major outpost in war-torn Libya and is said to be seeking recruits and affiliates in countries such as Russia and Afghanistan. Southeast Asia, with some of the world’s largest Muslim communities and a history of domestic jihadi movements, is seen as a particularly fertile recruiting ground.

“This type of asymmetric warfare will continue and probably increase as more and more Muslims will be radicalized by the global war on terror,” said Peter Maguire, a professor with the University of North Carolina Wilmington.

Hundreds of militants were recruited from the Philippines, Malaysia, Cambodia, Thailand and Indonesia — the world’s single most populous Muslim nation — as Isalmic State began establishing its “caliphate” three years ago. In Jemaah Islamiyah (“Islamic Congregation”), a radical Islamic terror group that once operated cells across the region, Islamic State could study an organization that was strikingly similar both tactically and ideologically.

An updated estimate issued in December by the private intelligence consulting firm The Soufan Group numbers Islamic State recruits from Southeast Asia as “at least 600,” with a large majority coming from Indonesia.

“Since July 2014, the Islamic State has posted propaganda and recruiting videos aimed at persuading Indonesians and Malaysians [to travel to] Syria with their families,” the Soufan survey reported. “One video showed Malay-speaking children training with weapons in Islamic State-held territory, while two Malaysians were featured in another Islamic State video of the beheading of a Syrian man.”

Jemaah Islamiyah linked up with al Qaeda and unleashed a bloody bombing campaign throughout the 2000s, claiming hundreds of lives in pursuit of their demands for a single Muslim state across much of Southeast Asia, including parts of northern Australia, with a caliphate at the helm. At its height the group claimed some 5,000 fighters.

Most of its members have since been jailed or killed, and surviving remnants are adopting a soft approach to the new crop of jihadis while maintaining ties with al Qaeda and its affiliate al Nusra.

The region’s security threats were not lost on Secretary of State John F. Kerry, who late last month made a short tour of Cambodia, Laos and China ahead of a summit between President Obama and leaders of the 10-nation Association of South East Asian Nations (ASEAN) to be held at Sunnylands, California, in mid-February.

U.S. relations with Cambodia have been held back by human rights abuses and Phnom Penh’s tilt toward China’s maritime ambitions in the highly contested South China Sea, but Mr. Kerry found some common ground with Prime Minister Hun Sen, the region’s longest-serving leader.

Mr. Kerry said it was agreed that countering Islamic State and “violent extremism was absolutely a top priority,” adding that Cambodia “had an interest in having our teams, our experts, come in order to brief and exchange ideas.”

The fears of Islamic State infiltration are more pronounced here because Cambodia has too often attracted Islamic militants in search of a place to hide.

Among them is the Guantanamo Bay inmate Riduan Ismuddin. Also known as Hambali, the Jemaah Islamiyah operative was the mastermind of the 2002 Bali bombings that claimed more than 200 lives. Lately, at least one suspect in last year’s Erawan Shrine bombing in Bangkok, one that left 20 people dead in the heart of the Thai capital, was nabbed while hiding out in a Phnom Penh red-light bar district.

But the broader threats posed by Islamic militancy go much deeper, particularly in Indonesia, Malaysia, the Philippines and, to a lesser extent, the three provinces of southern Thailand.

In the wake of the 9/11 attacks, Jemaah Islamiyah also established links with the Abu Sayyaf Group, which has a history of kidnapping and ransoming of foreigners in the southern Philippines dating back to the late 1990s.

In November a leaked memo from the Malaysian police warned that Abu Sayyaf had established cell networks across Malaysia in preparation for attacks there.

This would represent a significant expansion of the self-proclaimed jihadi group that, along with the Bangsamoro Islamic Freedom Fighters, another Filipino terror group, has sworn allegiance to Abu Bakr al-Baghdadi, who has led Islamic State for almost five years.

Todd Elliott, a risk analyst with Jakarta-based Concord Consulting, said given the close interaction of jihadis from different countries within the Katibah Nusantara, it was possible that Malaysian militants would become increasingly active at home and in other parts of Southeast Asia, expanding Islamic State’s brand and its prestige as it grows.

“Given the long presence of jihadism in Malaysia, the conservative nature of Islam in Malaysia and the involvement of several Malaysian citizens in [Jemaah Islamiyah], it is likely that the emergence of ISIS has to some extent galvanized domestic militant networks and their supporters,” Mr. Elliott said.

“Several alleged plots foiled in Malaysia over the past year, including the arrest of a potential suicide bomber earlier this month, increases the likelihood that ISIS-inspired violence will occur in Malaysia sooner rather than later,” he said.

Further, at least 19 veterans of al-Baghdadi’s front lines have gone on trial in Indonesia for conspiring with terrorists and face up to 20 years behind bars. Pledging allegiance to Islamic State can also result in a person’s citizenship being revoked.

Islamic State videos urging jihad in Southeast Asia are common on social media, and Mr. Elliott said a recent nine-minute video posted on the Internet had called for attacks on Indonesia’s Presidential Palace and the Jakarta Police headquarters before it was blocked.

Islamic State’s gains and its powerful social media propaganda efforts have sown confusion in the region about which attacks are locally planned and which are part of a global jihadi network. For instance, the senior leadership of Islamic State quickly claimed responsibility for the Jan. 14 attack in Jakarta on a Starbucks and a Western-style department store, but it is still not clear if the claim was true.

Police investigations indicated forces behind that strike were tied mainly to older domestic terrorist networks. And at least two suspects had served time behind bars for terrorism-related offenses with links to Jemaah Islamiyah and former rebels who fought for independence in the eastern province of Aceh.

“The attack in Jakarta demonstrates that local ISIS supporters have the capacity and determination to carry out violence in the name of the global terrorist group, but there are doubts the violence was purely an ISIS operation,” he said.

His sentiments were similar to Indonesia’s national police spokesman Anton Charliyan, who recently named Santoso, head of the East Indonesian Mujahidin terrorist group known by its Indonesian acronym MIT, as one of the most wanted terrorists in Indonesia.

MIT’s base in Poso, on the far east island of Sulawesi, offers a close proximity to like-minded groups in East Malaysia and the Southern Philippines, cutting across a lawless zone of smugglers and rebels who ply the Sulu and Celebes seas.

In 2005 the world was horrified by the beheadings of three teenage Christian schoolgirls by Muslim militants amid an outbreak of religious violence. More recently, MIT has been receiving cash and assistance from Islamic State along with its calls for attacks on Western targets.

“The Santoso group is part of the ISIS network,” Mr. Charliyan said.

There is no shortage of well-equipped special forces, like Indonesia’s Densus 88, capable of dealing with imminent threats posed by Islamic State. The biggest challenge is timely intelligence, and perhaps their biggest weapon is ordinary people, who are fed up with the carnage.

That resentment recently stirred the Nahdlatul Ulama (NU), which was established in the 1920s when Wahhabism — an austere Sunni brand of Islam based in Saudi Arabia — was spreading its influence across the Muslim world. Osama bin Laden was an adherent.

With Islamic State largely still in its Syrian homeland, Mr. Kerry said he was optimistic that the Sunnylands summit would provide ASEAN leaders with a chance to discuss blocking Islamic State gains in Southeast Asia.

Others, however, were less sanguine.

“After 15 years of fighting on battlefields around the world, the West still does not have a coherent long-term policy with an attainable political objective,” said Mr. Maguire, the North Carolina researcher.

“There are limits to the use of force, and we have reached them. The only real solutions will be political, and until the West has the stomach to face them, these types of attacks will become increasingly common around the world,” he said.