You are here: Home / Analysis / Islamic State and Taliban : a history of their fallout 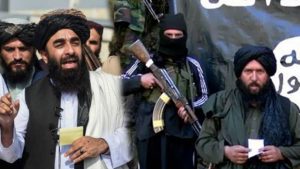 When ISIS claimed responsibility for a series of bomb attacks in Afghanistan which targeted the Taliban this week, the terror act marked the latest in the historical conflict between the two extremist groups, like reported by alarabiya.net.

While the Taliban’s return to power in Afghanistan was met with celebration by many terror groups, ISIS was the notable exception.

Who are the Taliban and ISIS?
The Taliban and ISIS are both extremist groups seeking to form authoritarian states under their strict interpretation of Sharia law and are prepared to use violence to achieve their aim.

One aspect that experts, such as journalist Mah-Rukh Ali, point to is the group’s interpretations of how to treat women under Islamic law. In a 2015 paper published by the Reuters Institute for the Study of Journalism, Ali highlighted that ISIS sexualizes women as objects in a way the Taliban does not.

Jason Burke, foreign correspondent for The Guardian, noted that groups including the Taliban, who have “shown greater pragmatism in recent years,” stand in stark contrast to those, like ISIS, “who believe in unmitigated violence, extreme commitment to doctrinal purity and apocalyptic predictions.”

Are the Taliban and ISIS enemies?
The two forces are long-time foes who have fought bitterly since 2015 when ISIS formed the arm of the extremist group in Afghanistan’s Khorasan Province (ISKP) at a time when it was first seeking to extend its geographical reach beyond Iraq and Syria.

Days prior to the final US pullout in Afghanistan, ISIS-K, the arm of the extremist group in Afghanistan, carried out a suicide bombing at Kabul airport. The bombing killed 13 US servicemen and over a 100 Afghans, becoming the deadliest day for the US military in Afghanistan since 2011.

Most notably, in the group’s first statements following the Taliban’s seizure of Afghanistan, ISIS has “basically called the Taliban a stooge of the US” and suggested it “was handed Afghanistan on a silver platter” by America, a BBC expert on extremist messaging Mina Al-Lami told NPR.

What is the history of ISIS and Taliban fallout?
ISIS, which was formed in 1999, began recruiting Taliban defectors in 2015, after establishing the ISKP in Afghanistan.

The two forces went to war later that year, after the Taliban leader Mullah Akhtar Mohammad Mansour asked his ISIS counterpart Abu Bakr al-Baghdadi to stop recruiting former Taliban fighters. He had called for the two groups to unite under the Taliban’s leadership to achieve a common goal of ruling by sharia law.

ISIS and the Taliban fought each other again in 2017, in the Jowzjan province of Afghanistan. Violence continued until the ISKP was “almost entirely eradicated” by US and Afghan forces in 2019, The Independent explained at the time.

The Taliban signed a peace deal with Donald Trump’s administration in February 2020 which, as well as agreeing to the withdrawal of US troops within 14 months, allowed for some continued violence, though at a reduced level.

ISIS has most recently criticized the Taliban for working with Western governments and organizations, and its latest statement indicates that the group considers that the Taliban is willing to collaborate with the West.

What has been the latest conflict since the Taliban takeover?
Fierce battles have taken place between the Taliban and the local ISIS affiliate in Afghanistan, after the takeover. Days after taking control of Kabul, the Taliban claimed to have removed the former head of ISIS in South Asia, Abu Omar Khorasani, from an Afghan prison before executing him “on the spot,” The Wall Street Journal reported.

On Sunday, ISIS claimed responsibility for a series of bomb attacks in Afghanistan in which 35 Taliban members were killed or wounded, the extremist group’s Amaaq News Agency said on its Telegram channel.

Additionally, “ISIS considers Shia Muslim heretics,” the BBC’s al-Lami continued. Shia civilians are considered “legitimate targets” by ISIS, whereas they are not by the Taliban. The difference in views is shown in ISIS’s description of the Taliban as “apostates.”

Groups including the Taliban, who have “shown greater pragmatism in recent years”, stand in stark contrast to those, like ISIS, “who believe in unmitigated violence, extreme commitment to doctrinal purity and apocalyptic predictions”, Burke summarized.

ISIS vs The Taliban: A growing concern?
In the first quarter of 2021, the United Nations Assistance Mission in Afghanistan recorded 77 attacks that were claimed by or attributed to ISKP. Burke has described the faction as “perhaps the ugliest character in the Star Wars bar for extremists that Afghanistan has become” in The Guardian.

On Saturday, US officials said that alternative routes to Kabul airport were being established to protect Afghan civilians and US personnel from the threat posed by ISKP. A US defense official told CNN that “there is a strong possibility” the group could try to carry out an attack on the airport.