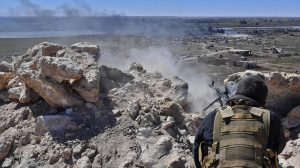 The ISIS terrorist group on Monday ambushed a regime convoy in eastern Syria, killing at least 26 fighters, a Britain-based war monitor said according to alarabiya.ne.

The Syrian Observatory for Human Rights said the early morning ambush in the province of Deir Ezzor came as the convoy combed the area for extremists.

“Violent clashes between the two sides led to large human losses,” it said, calling the toll from fighting the “largest since the start of the year.”

Last month, ISIS said it was behind a December 30 bus ambush in Deir Ezzor province, which killed at least 37 Syrian soldiers.

ISIS in 2014 overran large parts of Syria and Iraq and proclaimed a cross-border “caliphate” before multiple offensives in the two countries led to its territorial defeat.