You are here: Home / Africa / Islamic State, Al-Qaida ‘on the march’ in Africa 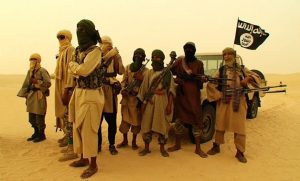 Western-backed efforts to counter terror groups across Africa are falling short, increasing the chances one or more affiliates of Islamic State or al-Qaida could try to carve out their own caliphate on the continent, according to the latest assessment by a top U.S. commander, like reported by voanews.com.

The stark warning, shared with lawmakers Tuesday, builds on previous intelligence showing Africa-based groups have been growing more ambitious and more capable, with some increasingly bent on targeting the West.

“Western and international and African efforts there are not getting the job done,” Gen. Stephen Townsend, commander of U.S. Africa Command, told lawmakers regarding developments in West Africa and the Sahel.

“ISIS and al-Qaida are on the march,” he said, using an acronym for Islamic State. “If ISIS can carve out a new caliphate, or al-Qaida can, they will do it.”

U.S. officials warn that many of the IS and al-Qaida affiliates have already grown so strong that Africa Command has been forced to shift its strategy to trying to contain the groups rather than to degrade their capabilities.

Much of the attention has focused on the IS affiliates, buoyed by publicity from a steady stream of attacks on Nigerian government forces and others in the region.

But military officials warn it is the increased activity by al-Qaida affiliates in West Africa that is their biggest cause for concern.

“They’re quietly establishing their connections,” he said. “We’ve seen them intermarry into the local tribes. We’ve seen them become very entrenched in local politics and do this very quietly. But they know if they’re too public about their intentions, or if they raise the flag over some city, that will draw the attention of the West.”

Making matters more complicated, U.S. military and intelligence officials say they see an increasing willingness by al-Qaida and IS affiliates to collaborate.

One United Nations official said such cooperation was one of the factors behind a “devastating surge” that saw 4,000 civilians killed in Burkina Faso, Mali and Niger last January.

There are also concerns in East Africa, where the U.S. has focused increased firepower on al-Shabab in Somalia.

“The (al-Shabab) threat has been higher in the last few months than it was eight months ago when I first got to AFRICOM,” Townsend told reporters Tuesday after the hearing. “They aspire to attack Americans wherever they find us, to include the homeland.”

However, some U.S. allies are pushing back, agreeing that while the long-term concerns are real, the immediate threat is overstated.

“In the short term, the Sahel region and the Horn of Africa are unlikely to replace the Middle East and Afghanistan as regions from which the main threat to Europe emanates,” one European Union security official recently told VOA.

That type of sentiment may be making it more difficult for the U.S. to persuade some European partners to put more resources into the counterterror fight at a time when the Pentagon is looking at reducing its military footprint.

The U.S. has about 6,000 troops in Africa, but officials are in the middle of a review that could reduce that number by perhaps 10% or more over the next few years.

“The Sahel is principally a CT (counterterror) mission,” Defense Secretary Mark Esper said during a trip to Europe last month. “I’m not looking to put more troops in that fight.”

Instead, the U.S. and France, which has been leading the counterterror fight in West Africa with about 5,100 troops, have been pressuring other European countries to increase their military contributions.

“We’re not a lead partner in any of that. We’re a supporting player,” Townsend told reporters. “We, the world, need to do something about that.”